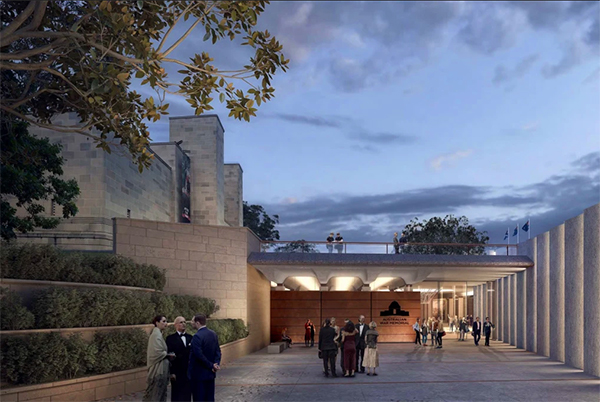 Artist impressions of the new entrance to the Australian War Memorial.

A fresh spotlight is on the federal government’s plans to spend almost $500 million on a controversial redevelopment of the Australian War Memorial at a time when other cultural institutions, including the ABC and the National Gallery of Australia, are being forced to cut staff.

A parliamentary inquiry is under way into the nine-year $498 million proposal announced in 2018 to redevelop and expand the nation’s premier war shrine. The Parliamentary Standing Committee on Public Works will hold a public hearing on July 14 to scrutinise the proposal. 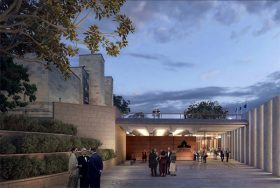 Artist impressions of the new entrance to the Australian War Memorial.

Public submissions for the inquiry closed last week with the vast majority of the 71 submissions against the project. Historians, academics, veterans and a former director of the War Memorial are among dozens of prominent Australians who oppose the works.

Author Tom Keneally called the project “howlingly inappropriate” when institutions such as the ABC and the National Gallery of Australia were being forced to cut staff.

“We really don’t need this, and particularly at a time when half a billion would go so far on other projects,” he told The Age and The Sydney Morning Herald. “My father was a Digger in the Middle East. He was away three years so I’m not anti-Digger but we just don’t need it.”

Mr Keneally also took issue with what he believes is the promotion of a selective view of Australia’s military history.

“We should have a commemoration in its broadest sense,” he said. “They seem only to want to gild the Gallipoli lily – which is some lily, but I think it is already gilded.”

“I think half a billion dollars is extraordinarily difficult to justify,” he said. “I just can’t see how they can possibly justify it. It’s contrary to the prevailing heritage management plan and totally out of proportion of the need.”

The National Gallery of Australia this week announced it would sack about 30 staff due to a reported $3.6 million funding shortfall. Director Nick Mitzevich said annual budget reductions via government efficiency dividends were “unhelpful” but also pointed to other factors such as flat-lining interest income and rising utility costs.

Earlier in June this masthead revealed the National Library of Australia would cease to collect material on Japan, Korea and mainland south-east Asia. The library, which is undertaking a major restructure, blamed funding that had “diminished over several decades, as a result of efficiency dividends”.

This week the ABC announced it would cut 250 jobs in a restructure related to a funding freeze that is expected to cost the broadcaster $84 million over three years.

Veterans’ Affairs Minister Darren Chester said the project “does not come at the expense of investing in veterans’ services”.

“The Development Project will ensure the stories of recent and current Australian service … are told to the public in the same way as the First and Second World Wars, Korea and Vietnam,” Mr Chester said in a statement.

“This will create jobs during construction, including for our veterans, will have economic benefits, drive demand for goods and services, and provide continuity and consistency for the construction industry and supporting sectors.”

War Memorial director Matt Anderson said the one-off capital investment would “not provide any relief for the ongoing cost pressures of running the Memorial”.

“The Memorial’s commercial revenue stream has been affected by the same factors experienced at other cultural institutions, including reduced interest rates, and significant impacts on the retail and catering activities,” he said. “We too have had to absorb reductions in federal government funding towards our annual running costs in recent financial years.”

Anyone interested in appearing at the inquiry can register online.