You are here: Home » Articles filed under: 'News' » Article: 'AWM For Country, For Nation exhibition'

AWM For Country, For Nation exhibition 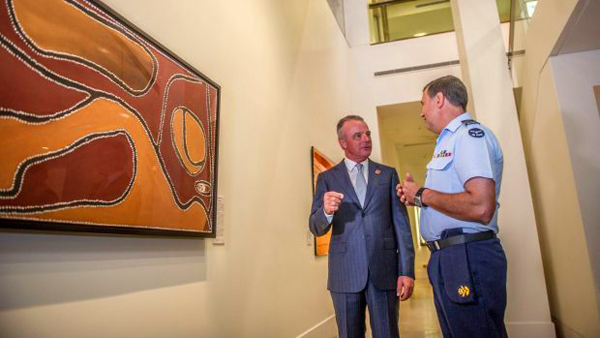 There’s a thought provoking juxtaposition happening in a corner of the Australian War Memorial. Within the exhibition For Country, For Nation, which highlights the contribution that Aboriginal and Torres Strait Islander people have made in the service of Australia, is a newly acquired painting which makes you question why they ever would.

Memorial director Dr Brendan Nelson unveiled Ruby Plains Massacre 1 on Friday, a striking painting by Rover Thomas which depicts the aftermath of an incident in which the Ruby Plains Station owner shot dead several Aboriginal men in retaliation for killing a bullock.

The first thought is to ask why such a painting even has a place in the Australian War Memorial, given it has no obvious military connection.

“I want people to reflect on this painting and then turn around and and view For Country, For Nation and ask questions about why the Aboriginal people wanted to fight,” Dr Nelson said.

“When the First World War broke out, despite being prohibited from enlisting, at least 1500 men of Aboriginal and Torres Strait Islander background enlisted to fight for the young nation that had taken so much from them.”

“It’s a whole different way of looking at how things are, how they were, and this painting, here in the War Memorial, is an acknowledgement of that.”

Rover Thomas is remembered as one of the truly great Aboriginal artists. Born in 1926 in the Western Desert on the Canning Stock Route, Thomas became a stockman eventually settling at Turkey Creek. He didn’t start painting until the 1980s as a way of recording historical events that had been passed down through the oral tradition.

Dr Nelson said the For Country, For Nation exhibition would begin a national tour when it closes at the AWM on September 20, 2017. He said it was important for all Australians to have an understanding of the place the Indigenous people had in Australia’s military history.

For Squadron Leader Oakley, both the painting and the exhibition are a recognition of the “secret history of Indigenous service”.

“We’ve been in uniform since before the Boer War, since the 1860s, serving the country before we were even allowed to serve,” he said.

“If we can get people thinking about why they were fighting for a nation that didn’t treat them as human beings, one that would kill them out of hand … and that all comes back to love of country.”

For Country, For Nation is exhibiting at the Australian War Memorial until September 17, 2017.