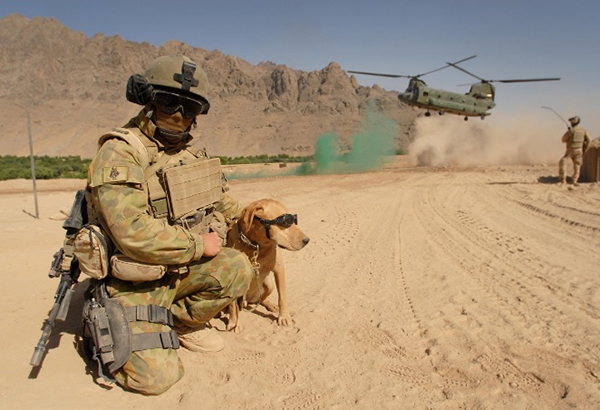 Military service dog, Aussie, is one of the canines being remembered through a new memorial. Photo: Australian War Memorial.

On the National Day for War Animals in Australia (24 February), the Australian War Memorial (AWM) unveiled a new monument for military working dogs and their handlers, immortalising and remembering them for the crucial role they have played in the Australian Defence Force (ADF) since World War I.

The Memorial – titled ‘Circling into Sleep’ – is in the AWM’s sculpture garden. 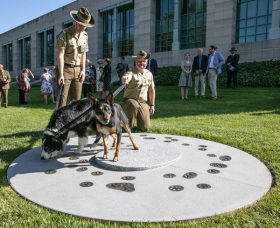 The monument depicts a dog circling before going to sleep. Photo: Ian Roach via the Australian War Memorial.

It acts as a reminder of the invaluable contribution, and special bond, that military dogs have offered the ADF over the years, Acting Director of the AWM Major General (Rtd) Brian Dawson said.

“The ADF has a long tradition of working with dogs, from the First World War through to operations in places such as Afghanistan, East Timor and Somalia,” he said.

“In 2017, the ADF commissioned the Canine Operations Service Medal, becoming the first military in the world to specifically recognise and honour the contributions of military working dogs.”

The ashes of military working dog, Aussie, were interred in the Memorial last December. Aussie served four deployments in Afghanistan, and one in the Solomon Islands in 2004. Aussie retired when he was 12-years-old and passed away in 2017 at age 16.

“Dogs, including Aussie, whose ashes are interred here, have detected explosives, searched for and attacked the enemy, provided base security, and laid their lives on the line to save others,” General Dawson said.

“This memorial is a fitting tribute to their loyalty, bravery and sacrifice.”

Artist Steven Holland created the memorial with the help of explosive detection dog Billie and her handler. Billie walked in a circle on a bed of soft clay to embed her paw-prints, representing a dog circling before sleep.

“This is the dogs’ memorial. It is low to the ground and humble,” Mr Holland said.

“The tear stone and the paw prints symbolise the remembrance of military dogs. Through their playfulness and curiosity, their intelligence and insight, their bravery and their faithfulness, they made a profound impact.” 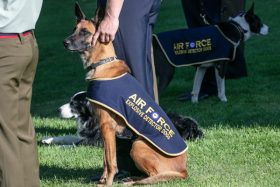 Although exact numbers are unknown, it is thought that 13 explosive detection dogs served in Afghanistan, with the names of five of those dogs who were killed in action – Marlin, Razz, Andy, Nova and Herbie – are listed on a memorial at Yungaburra, Queensland.

Two other service dogs – Quake and Devil – died while serving with the Special Operations Task Group in Afghanistan.

The Sculpture Garden is located to the west of the AWM’s main building and includes sculptures of Simpson and his donkey, Australian serviceman, Sir Edward ‘Weary Dunlop and a work commemorating the medical staff who came to the aid of Australian prisoners of war in the Pacific in the Second World War.