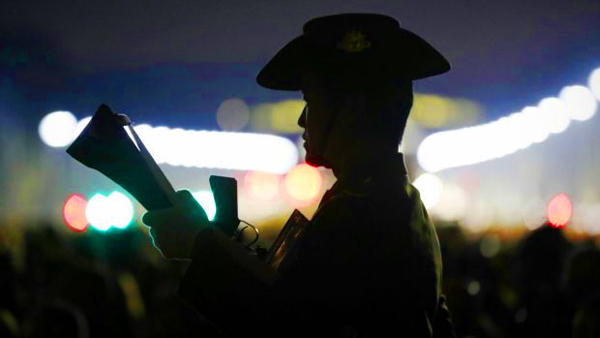 Braving the morning cold and spitting rain, as many as 38,000 visitors gathered at the Australian War Memorial to commemorate Anzac Day on Tuesday.

Empty space in front of the Stone of Remembrance began to fill slowly around 4am, when the first dedicated visitors claimed their spots for the dawn service.

“People asked me if I was worried about the forecast. But that doesn’t bother me, you can’t let a bit of rain stop you.”

Mr Bradley said that, for him, observing the dawn service was a way to remember the wartime sacrifices of his family.

“I think about my grandma and my great grandfather and the things they did.

“Coming down here, it’s just got to be done.”

Pre-service ceremonies began at 4.30am with readings from the wartime diaries of Australian soldiers, a poignant reminder of the harsh circumstances that gave birth to Anzac Day.

Captain Lisa Batchelor from the Royal Australian Navy read from a letter a World War II soldier penned to his mother in March 1942.

“Please don’t worry about what we are doing, or what might happen to us,” the letter read.

“As your son, anything I do is to your credit, and if anything should happen to us, you can still hold your head high.”

Images of Australian servicemen and servicewomen were projected onto the front façade of the memorial as the letters were read.

At 5.15am the lights surrounding the memorial were dimmed and the haunting sounds of the didgeridoo, played by Leading Aircraftman Brodie McIntyre, heralded the start of the service proper.

“At this hour, on this day, 102 years ago, the Australian and New Zealand Army Corps, at Gallipoli, made immortal the name of Anzac and established an imperishable tradition of selfless service, of devotion to duty, and of fighting for all that is best in human relationships,” he read.

“We who are gathered here today in this dawn vigil remember with gratitude the men and women who have given, and are still giving, in our armed and supporting services, all that is theirs to give.

“In order that the world may be a nobler place in which to live.”

“In the aftermath of so many conflicts, men and women have come home silent, suffering in private, all alone.”

He continued: “May we, on this Anzac Day, look back on their exceptional courage, endurance, dedication and sacrifice.

“May we honour those who have died and suffered in old wars and new.”

Director of the memorial, Dr Brendan Nelson, said he was proud of the continuing commitment and dedication of everyday Australians to the annual commemoration.

“The attendance at this year’s Dawn Service shows the enduring connection so many people have to Anzac Day and what it represents for our servicemen and servicewomen – and indeed for all Australians,” Dr Nelson said.

“The landing on Gallipoli is one of the most iconic moments in Australian history, but it is important to remember that for those who participated, it was just the beginning of their service.

“Many went on to endure the mud and blood and tragedy of the Western Front.

“This is the centenary of our worst year – we began 1917 in the snow of Bullecourt and finished in the blood soaked slime and mud of the Passchendaele ridge.

“Of the 76,000 casualties recorded that year more than 38,000 occurred in eight weeks during the Third Battle of Ypres.

“Anzac Day is the day we remember the commitment and sacrifice of all our men and women who have served in conflicts and on operational service, and those who continue to serve today.”

This year’s Anzac Day veterans’ march will be reviewed by Vice Chief of the Defence Force, Vice Admiral Ray Griggs, who will also deliver the commemorative address.

The Memorial will open to the public following the conclusion of the National Ceremony at approximately 1pm.

The Canberra forecast for the rest of Tuesday is for rain and a maximum temperature of 16 degrees.