You are here: Home » Articles filed under: 'News' » Article: 'AWM in good hands' 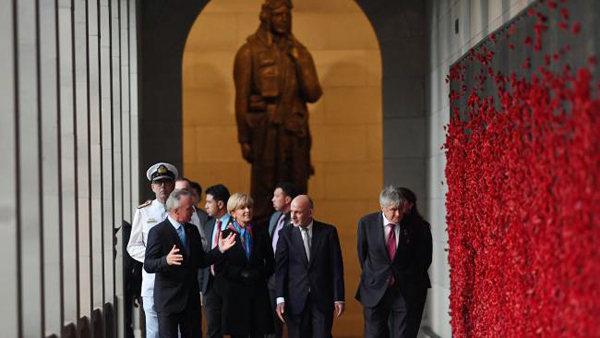 Director of the Australian War Memorial Brendan Nelson’s term is up at the end of this year. Photo: AAP Image/Lukas Coch).

Miranda Devine, Our war memorial is in good hands with this man, The Daily Telegraph, 18 April 2017

Over the Easter long weekend I went with my family to one of my favourite places, the Australian War Memorial. Not for nothing was it listed as Trip Advisor’s number one landmark in Australia and the South Pacific.

Museum director Brendan Nelson has done a stellar job since he was appointed in 2012, expanding and refurbishing the World War I and II galleries and installing a brilliant new permanent display dedicated to Australia’s current military involvement in the Middle East, covering the First Gulf War, UN weapons inspections, and the wars in Afghanistan and Iraq.

The gallery was full of young service men and women and their children on Sunday and Monday.

Also packed was the moving Last Post ceremony which occurs around the Pool of Reflection every day at 4.55pm. The National Anthem is sung, there is a bagpipe lament, laying of wreaths, the Ode to the Fallen, and the personal story is read aloud of one of the more than 102,000 Australians whose names are recorded on the Memorial’s Roll of Honour.

Nelson, a former Howard defence minister, instituted the tradition, modelling it on the Last Post ceremony at Menin Gate which he used to attend when he was our ambassador to the European Union and Belgium.

Among his most recent acquisitions are two powerful photographs of the 9/11 New York terrorist attack which mark the entry to the Middle-East gallery to explain why Australians went to fight in Afghanistan.

The “falling man” images show people jumping to their deaths from the World Trade Centre and were taken by Associated Press photographer Richard Drew on September 11, 2001.

I’m glad also to report that Nelson has kept the iconic inscription “Known Unto God” on the tomb of the Unknown Soldier, after attempts to replace it with some words from a Keating speech.

In less deft hands the War Memorial could have been damaged by the politically correct forces of our era. But Nelson has managed to retain the vision of Charles Bean, the WWI war correspondent who conceived the idea for a monument when a dying soldier in France asked if Australia would remember his sacrifice.

Nelson’s term is up at the end of the year. He should be asked to stay on another five years.