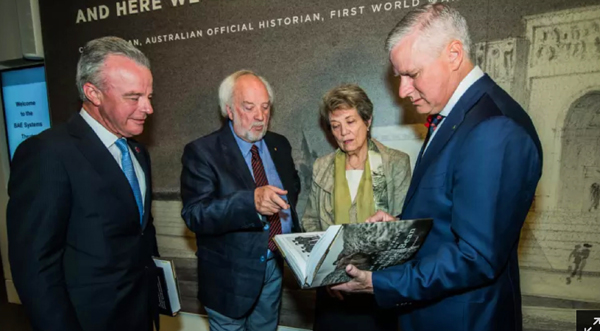 From accounts of his time in the Gallipoli trenches to descriptions of the bloody Battle of Pozieres, Charles Bean’s private diaries provide some of the most comprehensive insights into the terror, tragedy and sense of sheer pointlessness of World War I.

Now, for the first time, the first-hand accounts of Australia’s first war correspondent have been pieced together in a new book, The Western Front Diaries of Charles Bean.

The diaries, which for years were kept from public view, reveal Bean’s innermost thoughts when, as a 35-year-old journalist, he arrived at Gallipoli just hours after the Anzac landing on April 25, 1915.

They include harrowing recollections of the Battle of Pozieres in July 1916, which Mr Burness nominated as the book’s most memorable section.

“On the western front, the shelling was enormous and it shook him up,” Mr Burness said at an event on Wednesday to launch the book.

“He hated it and he was terrified and some of those things that he wrote those evenings, you just wondered what was happening to him.

“[He described] the terror, the horror and the sheer pointlessness of it all.”

Mr Burness also paid tribute to Bean’s feats after he returned from the war, most notably his efforts to establish a war memorial in Canberra.

Bean’s legacy was at the centre of public debate last year when it was announced the ACT’s new federal electorate would be named after the Bathurst native.

More than 70 people lodged formal objections to the renaming, with many labelling Bean a racist and referencing his efforts to block General John Monash’s promotion, in part because of Monash’s Jewish background.

At the time, the war memorial’s director, Brendan Nelson, defended Bean, saying he was a product of his time and had later realised his views were wrong.

“On the day [the war] ended, he was not sitting in a tent drinking champagne,” Dr Nelson said.

“He got in a car and he drove to Fromelles, he drives to the place where Australia had its worst day.

“He wanted to be with the men who had dreamt of the day that they would never see.”

“My grandfather put so much of himself into this, but it [the diary collection] has been down in the vaults of the war memorial,” she said.

The book’s launch came as the war memorial prepares to unveil on Friday 62,000 hand-crafted woollen poppies, which have been planted on its front lawns.

The poppies, one for each Australian who died in World War I, will be on display until Remembrance Day on November 11.