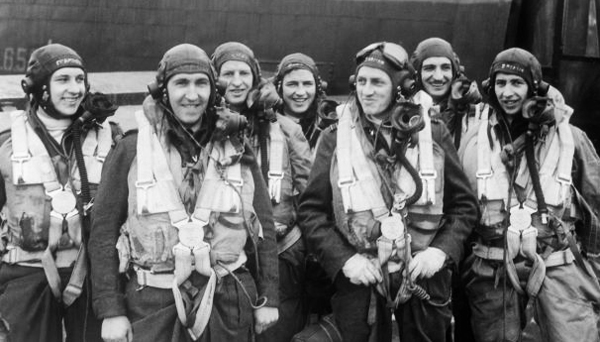 An Australian aircrew in Bomber Command, April 1944. Days after this photograph was taken, six of these seven men were killed in battle. Photo: Australian War Memorial.

In May 1943, Australian Flying Officer Charles Williams, a gunner in Bomber Command, became engaged to Gwen Parfitt, a secretary from Nottingham. Days later, he was killed in action during Operation Chastise – famously known as the dam-busters raid. To avoid radar detection and anti-aircraft guns, Williams’ Lancaster flew at low altitude. When it hit electricity pylons and ploughed into a field, burning fiercely, every man on-board was killed.

A country boy from a sheep station in Queensland, Williams was eager to see the world but had never travelled further than Brisbane. He joined the Royal Australian Air Force and flew a number of successful missions, for which he was posthumously awarded the distinguished flying cross.

Williams’ story will be told at the Australian War Memorial‘s Last Post ceremony this Saturday. It is one of the commemorative activities held during the annual Bomber Command reunion taking place in Canberra this weekend. With 2017 marking 75 years since RAAF squadrons joined combat operations with Bomber Command, the reunion is an increasingly rare occasion in which World War II veterans attend the memorial. Of the veterans attending this weekend, the youngest will be in their mid-90s. With those who fought World War II quietly departing, it is more important than ever to learn from the men and women who lived through the 20th twentieth century’s most devastating conflict.

Popular memory of Australia’s role in World War II focuses largely on those who fought close to home in the Pacific ­– the experiences of Australians at Kokoda, the Burma­-Thailand Railway and Changi, for example, are widely known. Australian service in Europe, however, is often overlooked. While the threat symbolised by such events as the bombing of Darwin and the midget submarine attack on Sydney Harbour is powerful, Australia played an important role in a wider struggle – not just against Japanese militarism in our region, but also against Nazism and fascism in occupied Europe.

From 1942, Australia’s main contribution to the war against Germany was made by the RAAF. With 27,500 Australian airmen serving in 300 different Royal Air Force squadrons, alongside Brits, Canadians and New Zealanders, experiences were diverse. Australians served in Bomber Command, Fighter Command, Coastal Command, Transport Command and Training Command. Casualties were high, accounting for nearly 20 per cent of all Australian combat deaths of the war. Of the 10,000 Australians who served in Bomber Command, more than one in three were killed.

The most skilled and highly trained aircrews spent up to two years training before flying combat operations with Bomber Command. Flights lasted up to 12 hours, mostly at night, in unpressurised and ear-splittingly loud aircraft, working in cramped spaces and freezing conditions, at times coming under attack from ground fire and enemy fighters. Many aircraft were shot down, casualties were severe, and the stress and trauma that came from the recurring battles in the night skies of Germany took its toll. An entire aircrew could be wiped out in an instant, or a lone survivor taken prisoner, left to ask why he alone of his six crewmates was spared.