You are here: Home » Articles filed under: 'News' » Article: 'AWM needs a new act, not a new building'

AWM needs a new act, not a new building 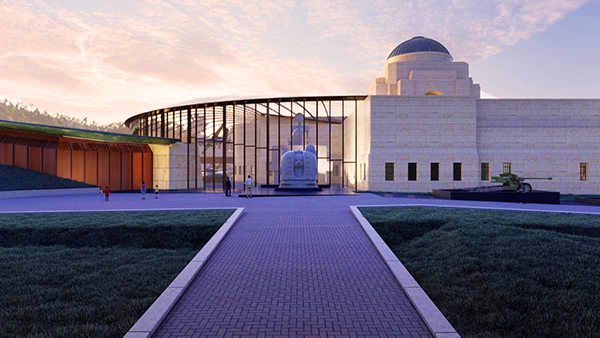 An artist’s impression of the proposed Australian War Memorial expansion – but the soldiers who fought in the Frontier Wars won’t be commemorated there. Picture: Supplied.

The Australian War Memorial doesn’t need a new building. It needs new legislation that enables it to properly commemorate the two key words in its title – Australian and war. It is essential that such a cherished institution expresses our national truth. Such truth-telling begins with the recognition that the first wars Australians fought were the Frontier Wars.

The current War Memorial Act dates from 1980. It is a good piece of legislation in that it proceeds from clear definitions that frame the nature of the wars to be commemorated and the service rendered in them. The reality is, however, that in the 40 years since the act was drafted and passed a whole body of scholarship has been developed, which records the reality of the wars that accompanied the arrival of white settlement and the spreading of settlements across the continent.

For an institution with the title “Australian War Memorial”, it is incomprehensible, and ultimately indefensible, for it not to recognise and commemorate the Frontier Wars. Previously it might have been argued that the events on the frontier of settlement were not “wars”, and instead were just some form of intermittent skirmishes. Not any longer.
To try and argue that they were not “Australian” would amount to the type of historical myth-making that sought to write people out of the story. The major thrust of contemporary historical analysis has been to lay bare the truth. Truth-telling is the only basis for sustainable nation-building. It accords with the earnest plea and generous invitation in the Uluru Statement from the Heart. It is clearly in line with the desire of the Australian community in our journey of recognition and reconciliation.

What first brought these questions to my mind was the 2018 National Gallery of Australia exhibition on the art of the Tasmanian Frontier War, which included portraits of key Aboriginal warriors. The text spoke openly of it being a war, and yet barely one kilometre away we had an effective alternate narrative of our history, where the Australian War Memorial makes no mention of such a conflict. 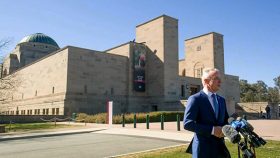 In September 2018 I raised my concerns, in identical but separate letters, to all members of the Memorial Council and its director, Dr Brendan Nelson. In his reply, on behalf of all council members, Dr Nelson stated that “the memorial’s charter and mission requires us to tell the story of the Australian experience of war and peacekeeping as defined by the Australian War Memorial Act, 1980. Internal conflicts fought between Indigenous populations and the colonial powers of the day, and conflict between groups in Australia, are not included in the act’s definition of war and peacekeeping”.

The director, in his own words, makes a cogent case for the current act to be amended. Clearly its provisions are not in line with historical facts, and only serve to perpetuate an offensive myth. Although it is not as simple as that. The act’s definition of “Defence Force” (so worded to include the pre-federation Boer War) could, arguably, be interpreted to include forces raised by the Crown against Aboriginal people in the Frontier Wars.

Certainly, the documented Tasmanian records of the Crown authorising and equipping forces to prosecute the campaign against Aboriginal people would fit this criterion. The problem would remain, however, that the memorial would be limited to telling the story of those wars only from the Crown’s side. Such a one-sided presentation would be totally unacceptable to modern Australians, if not open to claims of racism.

Dr Nelson is no doubt alive to these factors. His solution has been to advocate that the story of the frontier conflict should be told but, as advised in his letter, “the institution best placed to do so is the National Museum of Australia (NMA)”. To that end, the war memorial reached an agreement with the NMA in September 2013 that the latter organisation “would work toward including more content on the frontier wars in its colonial history exhibitions”.

This raises other issues. It is surely not in the gift of the director of the AWM to determine how such a fundamental part of the Australian narrative is to be told. These matters are too important to our foundation story for the manner of their telling to be stitched up in some sort of gentlemen’s agreement.

I wrote again to the director in March this year, urging that he and the Memorial Council “look at this matter with fresh eyes and clear minds”. I also pointed out that all Australians have a legitimate right to engage on this question, as it was intolerable for there to be ambiguity, confusion, or perhaps selective ignorance in the understanding and telling of our nation’s history.

The evidence of the scholarship is undeniable. The sincere request of Aboriginal people is for honest truth-telling. What we have here is either an opportunity for stunning national self-awareness that lets us all move forward together, or a futile effort to replicate the denials of the past.

The Frontier Wars were probably the first time Australians fought and died in the defence of this land. The exploits of Aboriginal warriors such as Yagan, Pemulwuy, Jandamurra, Dundalli and many others were driven by their obligations under cultural lore and their assigned roles as defenders of their people and lands. They were the first to fight and die to protect the lands we all now call Australia.

Unless the AWM recognises these conflicts, there is left hanging the thought that current interpretations are based on the premise that Aboriginal people are not Australian. Intolerable and unthinkable! An Australian War Memorial must recognise all Australian wars. Let’s sort this out before we go building a huge museum.

Terry Fewtrell is a former deputy chairman of the Australian Republican Movement and the author of George, Elise and a mandarin – Identity in early Australia.