You are here: Home » Articles filed under: 'News' » Article: 'AWM pigeon builds nest in Hall with' 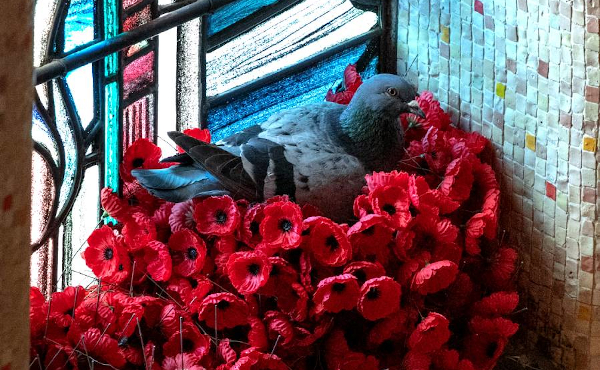 A pigeon has made its nest in the Australian War Memorial’s Hall of Memory. Picture: Ian Roach.

A surprise tenant has made an unlikely home in the Australian War Memorial’s most solemn place of remembrance.

The Hall of Memory has become host to a pigeon, which has stolen poppies from the Tomb of the Unknown Soldier to make its nest.

Photos show the pigeon nestling by the stained glass window of a wounded Australian soldier in a corner of the revered, mosaic-covered hall.

A war memorial spokesman said it would clear the nest once the pigeon is finished using it. The memorial is not feeding the unnamed bird, because it finds food by itself.

The wounded soldier symbolised the quality of “endurance”, and the nest of poppies nearby was a “reminder of the powerful bond between man and beast on the battlefield”, the war memorial said.

While pigeons are unloved in some quarters, historian Dr Meleah Hampton said they had been used in both war and civilian life for centuries.

“Whenever we talk about animals in war, they are fulfilling a purpose or performing a task that people can’t do easily on their own,” she said.

“So we use horses for transporting people or pulling guns, and we use pigeons as an answer to our problems with communication.

“Particularly in the early wars, communication is really difficult. Wireless is in its absolute infancy in the First World War and telephone wires get broken apart in the shellfire on the Western Front.

“So pigeons are particularly of use in warfare when you’ve got a couple of men trying to get a message from where they are back to the backline; a pigeon can get that through sometimes when nothing else can.”

Pigeons came back into use in the Second World War, a conflict that at face value appeared to involve only modern technology.

“We’ve got our trucks instead of horses, and wireless radio, and sophisticated radar signals, and all those sorts of things,” Dr Hampton said.

“But particularly in the Pacific, the mountains and the humidity meant that the wireless radios didn’t work very well,” she said.

Pigeons were the most effective way of getting messages up and over ranges, and throughout the islands. 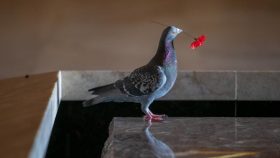 The pigeon stole poppies from the Tomb of the Unknown Soldier to make its new home.

The Australian Corps of Signals Pigeon Service was established, and thousands of birds were used to help solve the military’s problems with communication.

Between 1942 and 1943, pigeon fanciers across the nation gave 13,500 trained pigeons to the army to use for signals purposes.

“That civilian effort is, I think, this little magnificent under story of the war,” Dr Hampton said.

The memorial discovered its new resident pigeon ahead of National War Animals Day early next year, which the Canberra landmark will commemorate with activities on Sunday February 23, 2020.