You are here: Home » Articles filed under: 'News' » Article: 'AWM prepares for ‘Big Things in Store’'

February 18th, 2022 | Browse other: News. | Tagged with: australian war memorial, AWM prepares for ‘Big Things in Store’, war toys on display when the Australian War Memorial opens the doors to its storage facility | 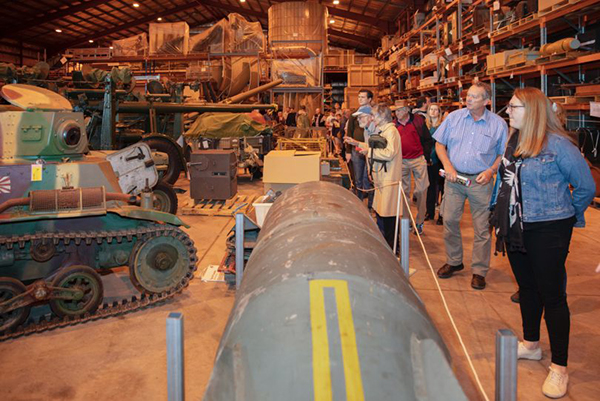 The last AWM Big Things In Store is open to the public for the first time since October 2019. Photo: AWM.

After years of rigorous service, ‘George’ is currently living out a peaceful retirement in a shed in Mitchell, but next month, the doors will crack open and the public will have a chance to visit the Air Force veteran again.

‘George’ is the Australian War Memorial’s famous Avro Lancaster Mk1 Bomber aircraft. It carried out some 90 bombing missions over Germany, Italy and occupied Europe during World War II, including 15 bombing raids on Berlin.

It was withdrawn from service following a mission over Cologne in 1944.

It will be among several war toys on display when the Australian War Memorial opens the doors to its storage facility in Mitchell on Saturday, 5 March, for its annual ‘Big Things in Store’ show.

Held at the Treloar Technology Centre, it’s an opportunity for members of the public to experience a behind-the-scenes look at the Memorial’s extensive collection.

It includes aircraft, rockets, vehicles, tanks, artillery and equipment used by – and against – Australians for over a century. 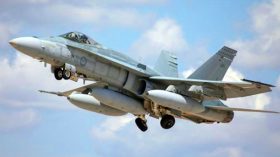 In addition to the much-loved George, visitors also have the opportunity to take a closer look at the F/A-18 Classic Hornet aircraft – fresh from retirement after more than 30 years of service and 6,000 flying hours. It flew 50 combat missions in Iraq and Syria against ISIL.

“It allows people to see more of the collection for a limited time than what’s currently on display. We’re always interested in providing the public further opportunities, in many different ways, to engage with the Memorial’s collection.”

One of the items is a composite display of the Japanese midget submarines that entered Sydney Harbour in the dead of night on 31 May 1942.

One got entangled in a submarine net while Allied depth charges damaged another, but not before the third fired torpedoes at the Royal Australian Navy depot ship HMAS Kuttabul, killing 21 Navy ratings.

The Japanese Midget submarine, a composite of two submarines – the Ha-21 and the Ha-14. Photo: AWM.

The first two submarines were recovered, dismantled and put back together to make one complete craft. This composite went on to tour Australia’s coastline before it came into the possession of the Memorial.

The fate of the third midget submarine remained a mystery for decades before amateur divers discovered it off Sydney’s northern beaches in 2006.

Another item on display is the Centurion Mk 5 – the main battle tank for the British and Australian armies after World War II. The Memorial’s specific example was deployed in South Vietnam alongside 57 other Centurions. In 1970, it was struck by three rocket-propelled grenades damaging several components. It was repaired and transported back to Australia later that year.

Other exhibits include Germany’s most common fighter aircraft, the Messerschmitt, and a Japanese suicide launch boat which was equipped with a 300 kg charge of TNT, designed to counteract Allied shipping and amphibious landing forces. There is also a Boeing CH-47 Chinook, a twin-engine, tandem-rotor helicopter used by the Australian Army for more than 25 years for transporting equipment and troops. 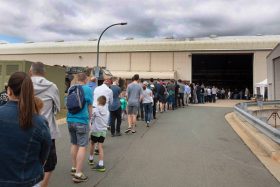 AWM Big Things In Store event at Mitchell in 2019 was a huge hit. Photo: AWM.

‘Big Things in Store’ was cancelled in 2020 and 2021 due to COVID-19 restrictions, and all visitors this time will require a timed ticket to attend this year’s event. There will be two-hour sessions available to book from 9 am on 5 March.

A limited number of free timed tickets to the Big Things in Store event have been released and are available to book now on the Memorial’s website. To avoid disappointment, members of the public are encouraged to book early.