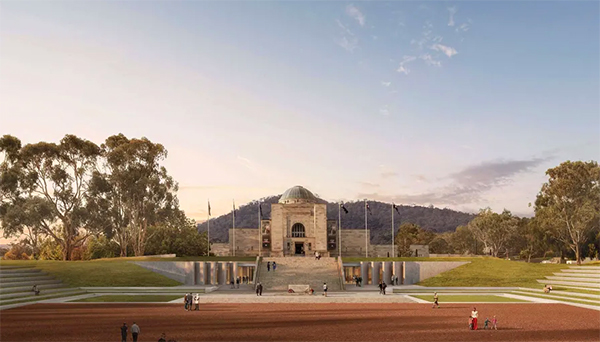 An independent heritage review of the plan to expand and redevelop the Australian War Memorial has determined that the proposal will have significant adverse impacts on the “iconic” building.

The review, commissioned by the Australian Institute of Architects and conducted by Ashley Built Heritage, also found the proposal does not comply with the AWM’s Heritage Management Plan, and identified shortcomings in the preliminary design and development processes.

The report found that the proposed redevelopment will have three significant impacts.

Firstly, the bulk and visibility of the glazed courtyard addition, designed by Cox Architecture, would result in “loss of visibility of the Memorial’s architectural values and form associated with its deeper meaning as a shrine.”

The Australian War Memorial, originally designed by Emil Sodersten and John Crust and completed in 1941, is listed on both the National Heritage List and the Commonwealth Heritage List.

According to its citation in the National Heritage List, the original main building is intended to be viewed “in the round.”

The heritage review report states, “The stepped cruciform form of the Memorial also has great historic importance as evidence of the original building design conceived as a memorial to honour sacrifices of WWI.

“This form should be retained as a separate structure as visible evidence of its original conception as a memorial to WWI.

“The key adverse impact will be from the glazed courtyard addition that would be a major accretion butted up to the side wings of the Memorial and will result in the loss of the external visibility of the semicircular apse form, as well as obscuring views of the dome and leaving the whole cruciform plan visually truncated. This will also impact the intangible heritage values associated with the shrine function of the AWM.”

It also found the proposed glazed courtyard and new Anzac Hall will “dominate and swamp” the existing building.

A second significant impact the review found is the proposed demolition of Anzac Hall, designed by Denton Corker Marshall, which would result in the loss of ” a highly contributory component of the AWM Campbell Precinct.”

Anzac Hall is included in the National Heritage List citation of the AWM. 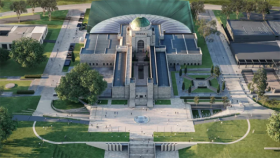 “The design of a high curved wall of aerodynamic plan form some 20 metres behind the main building provided space and retained the view of the original building ‘in the round’, as originally intended by Sodersten and Crust,” the citation reads.

“The hall sits unobtrusively behind the iconic main building. The fan shaped bulk of the building was excavated in the hillside, so that it would have the minimum impact on views from Anzac Parade, with a large curved metal roof fanning out from the centre point of a dome behind the wall. A simple steel/glass bridge link joins the existing building to the new hall. The stone, concrete, metal and glass of the new hall enable the new forms to ‘meld’ appropriately with the heritage values of the main building and its landscape setting.”

Anzac Hall was awarded the Australian Institute of Architects’ highest accolade for public architecture, the Sir Zelman Cowen Award, in 2005. If demolished, it would be the first building in the award’s history to face the wrecking ball.

The review also found that the proposed demolition does not comply with the AWM’s own Heritage Management Plan 2019 which includes a policy to “conserve, manage and interpret Anzac Hall: Respect the important architectural qualities of Anzac Hall including its external architectural form and siting which is subservient and recessive in the landscape and to the main Memorial building. Manage future change to Anzac Hall that is sympathetic to the heritage values of the Memorial.”

The third significant impact the review found concerns the proposed southern entrance, designed by Scott Carver, which would change the arrival sequence to the memorial, and “result in reduction, delaying and obscuring the immediate and profound experience of the memorial aspect.”

The review forms part of the Institute’s submission to the formal assessment of the redevelopment proposal under the Environment Protection and Biodiversity Conservation Act.

It concluded that refusal of the proposal would be justified but recommended that AWM reconsider its options including identifying “prudent alternatives that would retain Anzac Hall, not proceed with glazed courtyard addition and revise the southern entry such that the current entry and that experience is retained while also providing improved accessible access.”

In a letter to the department, the Institute said, “The Memorial has legislative obligations for the protection and conservation of the heritage values for all Australians. It is not apparent that the Memorial has liaised effectively or to the extent required for such a significant project or adequately assessed the proposal’s cumulative impact on the site. Over development will lead to significant adverse loss of the qualities that make the AWM nationally significant.”