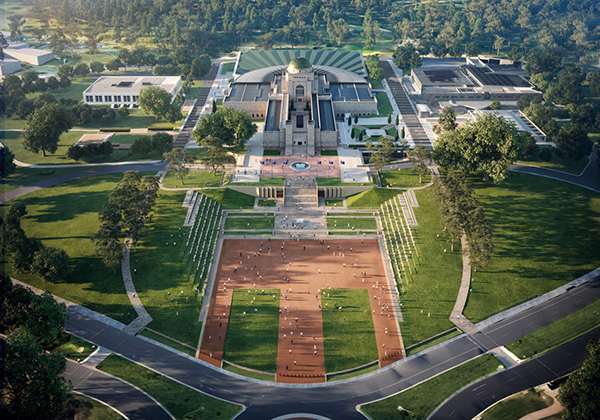 An aerial view of what the revamped War Memorial will look like. Photo: AWM.

The Australian War Memorial’s (AWM) $550 million development project will soon begin rising out of the ground after a contract was signed with the last of the three main construction partners this week.

The national institution has also released new images of what the revamped memorial will look like when the redevelopment is complete, including the roof of the new Anzac Hall which is inspired by the iconic Australian rising sun badge.

Lendlease joins Kane Constructions and Hindmarsh as the construction companies selected to proceed with the three separate works packages, which will bring the development to life between now and 2028.

The AWM said project designs had a host of special elements, including the oculus in the Southern Entry, which would be an inversion of the memorial dome.

To the north of the original sandstone building, the new Anzac Hall would contain an aperture of similar size to the oculus and dome, which would provide a visual connection between the two large gallery levels.

The AWM said Lendlease would also be responsible for delivering the glazed link with a translucent roof connecting the heritage building and new Anzac Hall.

This link would provide more than 7000 square metres of new exhibition space to tell stories of recent conflicts and peacekeeping operations.

Hindmarsh would be using world-leading technology to heat and cool the memorial, with its green energy geothermal central energy plant demonstrating how smart technology could be used to reach net-zero emissions, the AWM said. 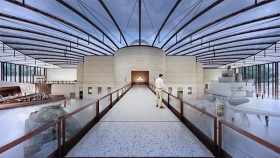 The glazed link between the new Anzac Hall and the main memorial building.

AWM Director Matt Anderson said the finalisation of the builders was an exciting milestone for everyone working on the development.

“Charles Bean wanted to create a memorial, an archive and a museum, and the building works embody this vision,” Mr Anderson said.

Australian War Memorial Executive Program Director, Wayne Hitches, said the redevelopment works were fully designed and documented, of the highest quality and the best value-for-money solution to meet the needs of the memorial for the next 50 years. 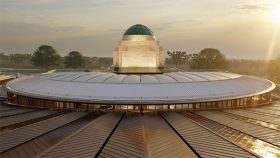 The project has been a controversial one for the memorial which has had to fend off objections about the cost, the replacement of the award-winning Anzac Hall, its philosophical direction and heritage concerns.

The National Capital Authority is conducting consultation on the Public Realm works involving the Western Precinct Carpark and Sculpture Garden and Poppy’s Carpark.