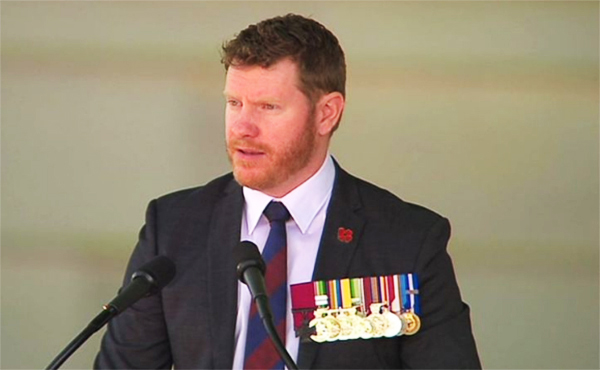 Today marks the 102nd anniversary of the Armistice which ended World War I in 1918 — but the annual Remembrance Day national service looks a little different this year.

Held at the Australian War Memorial in Canberra, the format of the service was altered to comply with the territory’s coronavirus restrictions.

Only a limited number of guests were able to attend, including servicemen and women, politicians, and dignitaries.

Nevertheless, onlookers gathered on the grass in the broad space around the memorial to watch the ceremony from a distance, all rising to stand in silence while The Last Post played. 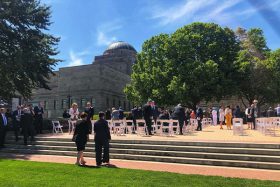 The crowd begins to gather for the Remembrance Day service outside the Australian War Memorial in Canberra. (ABC News: Adam Kennedy).

COVID-19 did more than impact today’s event — it was also the focus of the commemorative address delivered by Victoria Cross recipient Corporal Daniel Keighran.

“The events of 2020 have challenged us all,” he told the sombre, seated crown.

“Like war, they have shaped or sharpened our focus onto what is important — family, friends and loved ones.

“Australia truly is a lucky country and even in the most challenging of times there is nowhere else I want to be.”

Corporal Keighran paid tribute to the resilience of the Australian people while acknowledging there may be more hardship to come.

“[COVID-19] made us acutely aware of our national and international borders and just how quickly we could be cut off by people, places and things that we all hold dear,” he said.

“The pain and suffering of our nation and its people have been immense. So too has been the courage and conviction of all of us who understand what it means to be Australian during this difficult time.

“It is not the first time our nation has faced collective suffering and if you reflect on the past, history tells us that it most likely will not be the last.

“Dealing with adversity with grace, dignity, a sense of humour and courage is part of the Australian way.” 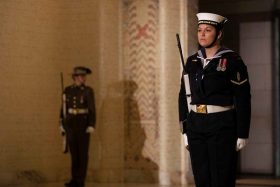 ‘I approach each day with a promise to make it count’

Drawing parallels between conflict abroad and COVID-19, Corporal Keighran urged Australians to honour the people close to them.

“During conflict in remote countries, as during this pandemic, there is comfort in the simplest of things — a laugh, a drink with a mate, a phone call home or even a hot shower,” he said.

“It is the Australian way to protect and honour those things that we hold dear. That means remembering all that we have lost, including more than 102,000 Australians who never made it home from war. We must never forget their sacrifice.” 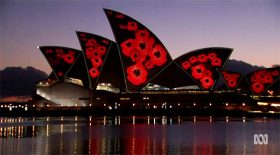 Corporal Keighran also reflected on his grandfather’s sacrifice during World War II, and encouraged the onlookers to make each day count.

“Growing up in regional Queensland, with dirt floors, no electricity and a lack of clean drinking water, my grandfather was my guiding light,” Corporal Keighran said,

“He didn’t let those dark days define who he was. Instead, he was grateful to be with us and he knew he was lucky to come home from the war when 40,000 Australians did not.

“I also know the guilt and pain of what it is like to come home when others tragically have not.

“In honouring those people and in guiding their memory, I approach each day with a promise to make it count.”

What was lost, and what has been gained 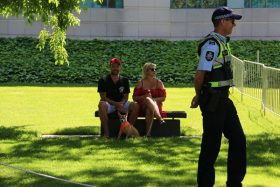 While they would normally be able to attend the Remembrance Day service, COVID-19 restrictions meant many people had to watch from afar. (ABC News: Niki Burnside)

The ceremony, broadcast across the country, began with Waltzing Matilda, Advance Australia Fair and the sounds of a digeridoo from in front of the Inauguration Stone.

“Remembrance Day marks the anniversary of the Armistice, which ended the First World War of 1914 to 1918,” host Scott Bevan told the small crowd.

“It was the largest and most costly conflict the world had known.

“Soldiers were left with unmarked graves. Many millions more were damaged physically and emotionally.

“More than a century has passed since the end of the Great War. Alongside our friends and our allies, our servicemen and women have continued to serve selflessly near and faring on battle lands near and far, on and under the oceans.

“It is an opportunity to reflect on the values we live by and to recommit ourselves to peace.”