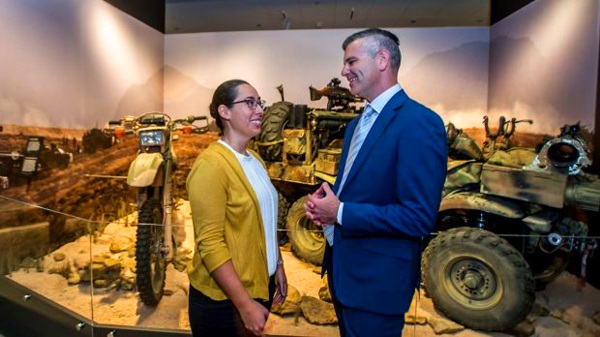 When Trooper Jason Brown was mortally wounded in a hail of bullets in Afghanistan seven years ago, the soldier who dragged him to safety was not named.

Known only as “Sergeant D”, he took fire himself as he went back for Brown, and was shot at least six times before he rose to his feet and killed the machine gunner.

His story was kept secret, even to his own family. But now, for the first time, Sergeant D’s actions, along with those of hundreds of his fellow Special Forces soldiers, are being brought out of the shadows in a “groundbreaking” new exhibition From the Shadows: Australia’s special forces  at the Australian War Memorial.

It is a feat more than a year in the making, director of the memorial Dr Brendan Nelson said, and the first time a collection has been gathered among the “Five Eyes” special forces communities of Australia, New Zealand, the United States, Canada and Britain.

The memorial was granted unprecedented access into the records and lives of Australia’s elite Special Operations Command, whose missions and names are kept secret. Historians travelled around the country to training barracks and to interview veterans and their families as they gathered 660 relics, uniforms, weapons and medals for display. Many were loaned personally by soldiers.

Special Forces are highly trained and can be inserted into any environment undetected by land, sea or sky. They’ve sunk Japanese warships in the dead of night and hunted bombmakers through the Afghanistan desert.

Since 9/11, they’ve seen “unprecedented” growth in their ranks. But, beyond casualties and medals, Dr Nelson said the Australian public had no idea what these soldiers faced on the frontlines of the Middle East and elsewhere around the world. In Afghanistan, fighting was often as intense as the battles of the Vietnam war.

“Because I have been Australia’s minister for defence I have had the privilege to see very close hand what they do, and what they have to deal with,” Dr Nelson said.

“So the argument I put to [Special Forces Command] was their…men are returning to a country that has absolutely no idea what they have been doing…and in order for us to help them come to terms with it, we need to tell their story and we need to tell it now.”

Dr Nelson said it was a sensitive project but curators had gone “as close to the edge” as possible without breaching security.

From the Shadows: Australia’s special forces will run for a year at the Australian War Memorial.