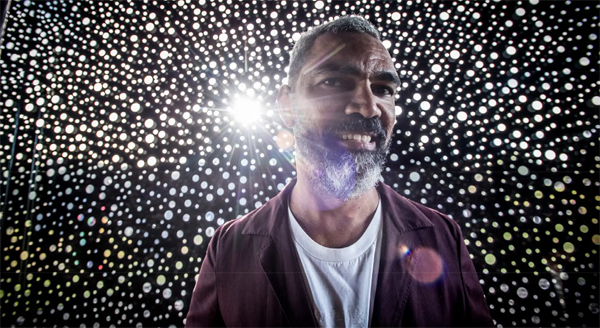 Artist Daniel Boyd: “It’s a space where people can come to contemplate and reflect on the sacrifices people have made.” Credit: Karleen Minney.

The Australian War Memorial has many quiet corners to sit and contemplate the sacrifices people have made in the defence of our country. Whether it’s in front of the iconic dioramas of the Great War or, perhaps, somewhat ironically, in the helicopter in the Discovery Zone as the soundtrack of Vietnam plays through the speakers.

Now there is a significant space, with the opening of For Our Country, a new sculptural pavilion commemorating the military service and experiences of Aboriginal and Torres Strait Islander peoples.

Situated in the lawns of the memorial, under the shade of the Lone Pine tree, For Our Countryfeatures a pavilion set behind a ceremonial fire pit. Behind this is a wall of two-way mirrored glass that reflects the viewer and the memorial.

Artist Daniel Boyd said his motivation was to understand the multiplicity of perspectives, or narratives, of how different people relate to country.

“It’s a space where hopefully people can come to contemplate and reflect on the sacrifices people have made,” he said.

“I wanted to create somewhere that was enveloping, where people could become part of the work. It wasn’t just about looking at something, it was about being a part of that work and how you interact with that work activates what it is you are feeling.”

Chief of the Defence Force General Angus Campbell said Australia has come a long way since the Defence Act of 1903 sought to bar Indigenous people from military service.

“Indigenous Australians have served with distinction in every war our nation has fought. For many, service was their first experience of equality, they wore the same uniform, they did the same training, they had the same opportunities, they received the same pay. More importantly, they supported and they were supported by their mates. They were as good as anyone else in uniform.

“But for a long time there was a great silence, a shameful silence, they were our unknown sailors, soldiers, aviators. That is no more. Today we know the names and deeds of many indigenous men and women who have served our nation.”

The memorial has undertaken a range of activities in recent years acknowledging the contribution of Indigenous peoples.

From the commissioning of the vast painting Kulatangku angakanyini manta munu Tjukurpa [Country and Culture will be protected by spears] which stands opposite the treasured bullet-ridden Gallipoli boat, to the acquisition of Ruby Plains Massacre 1 by Rover Thomas, which explores the idea of defence of country.

Research has been undertaken to identify more than 1100 Indigenous people who served during World War One and representations of those have been worked into the redeveloped galleries.

Memorial director Dr Brendan Nelson said this latest addition was a significant step in what is a long journey of recognising the service of Indigenous people.

“From a desperately unequal society they served, fought, suffered, and died for the young nation that had taken so much from them,” Dr Nelson said.

“Still today, Aboriginal and Torres Strait Islander men and women continue to do so with pride and professionalism, which is nothing short of inspiring. This sculpture honours their service.”

Later in the morning the book Our Mob Served: A history of Aboriginal and Torres Strait Islander histories of war and defending Australia was launched. Edited by Allison Cadzow and Marry Anne Jebb the book paints a vivid picture of Indigenous war service through oral histories and treasured family photographs.