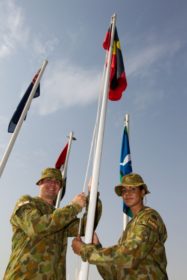 For Country, for Nation, the Australian War Memorial’s first exhibition dedicated exclusively to exploring Aboriginal and Torres Strait Islander stories of military service, will tour nationally from April 2018 until 2021.

The tour will begin at the Bundaberg Regional Art Gallery from 7 April until 3 June 2018.

Memorial Director Dr Brendan Nelson said the exhibition breaks new ground, presenting not only the military dimensions of service but also the desperately unequal social context in which this service was given.

“Only four or five generations after the arrival of the First Fleet in 1788, living in a desperately unequal Australia, Aboriginal and Torres Strait Islander peoples enlisted to fight for the young nation that has taken so much from them, often denying their heritage to do so,” Dr Nelson said.

“It is hard for non-Indigenous Australians to imagine the world as they saw it, but we must. Indigenous Australians have served in every conflict this country has engaged in and they continue to do so with pride and professionalism, which is nothing short of inspiring. This exhibition is an opportunity to honour their service.”

Suzanne Myers, acting Head of Exhibitions at the Memorial, said For Country, for Nation will guide visitors through six different themes designed to tell the story of Australia’s Indigenous service history.

“Unlike other exhibitions at the Memorial, the stories will be told from the perspective of Aboriginal and Torres Strait Islander people, with many shared through first-person voice,” Ms Myers said.

The curators employed a unique process for developing the exhibition which included working closely with a group of Elders to ensure Aboriginal and Torres Strait Islander input was central to the exhibition. The exhibition houses 60 works of art by 32 artists. Six artists from across Australia have also been commissioned by the Memorial to create works especially for the touring exhibition.

To highlight the significance of this national tour, a companion publication will be available in conjunction with the For Country, for Nation exhibition.

This project has been assisted by the Australian Government’s Visions of Australia program, and was achieved with the support of International Arts Services Australia.