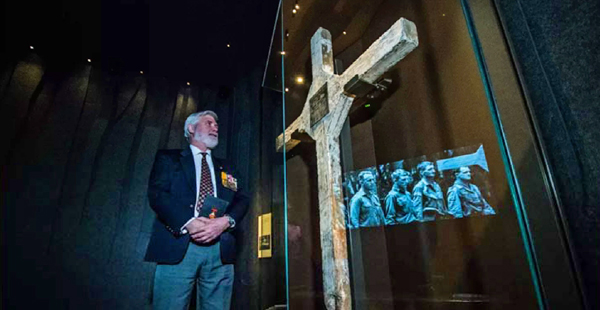 It was Delta company’s first contact of the Vietnam War and they would never see another like it.

The battle began in the mid-afternoon on August 18, 1966, and didn’t finish until after dark, the company fighting off a force estimated to be at least 10 times their size in monsoonal rains and under heavy fire.

By the time it was over, one in three men were dead or wounded, with soldiers returning to the site of the Battle of Long Tan three years later to plant a cross.

The cross came to embody Australia and New Zealand’s experience in the Vietnam War, which saw 521 Australians dead and 3129 wounded.

On Friday, the Australian War Memorial unveiled the permanent display of the Long Tan Cross in a ceremony attended by Governor General Peter Cosgrove and Foreign Minister Julie Bishop.

Dave Sabben’s company found Vietnamese forces and fired the shots which would mark the start of the Battle of Long Tan at about 3.40pm on August 18, 1966.

Mr Sabben, then a 21-year-old platoon commander, described Australian artillery landing about 22 metres from where he was, shells bursting at least once a second.

The Vietcong were closer still, their bodies being blown toward Mr Sabben and his fellow soldiers, half of which were conscripts in their early 20s.

“The noise, the flashes, the gun smoke, the gun fire … it was deafening. Most of us wear hearing aids nowadays,” Mr Sabben said on Friday.

Adding to that was the monsoon rains which began to bog the rubber plantation in which the battle was taking place.

Mr Sabben’s command had unknowingly attacked a force estimated to be at least ten times the size of their 108-strong company.

“That meant you could see these rounds coming towards you and hopefully going over you,” Mr Burstall said.

One hit a medic in the arm, the phosphorous burning through the man’s bone.

Mr Burstall, then 24 and who had willingly joined the Australian Army for an adventure, crawled into a pool of water to stay below the gunfire.

He didn’t think he’d get out alive as the battle went into the night.

At night, Australian reinforcements arrived, forcing the Vietcong back.

Eighteen men were dead and 24 wounded, but it’s likely the Australian forces had unwittingly repelled a major attack on a nearby base.

Three years later, then-Major Leonard Johnson oversaw the installation of what is now known as the Long Tan Cross.

It was a huge operation, with 1000 soldiers involved to install a memorial to the 18 dead in the middle of enemy territory.

After a small ceremony, the soldiers left.

Mr Johnson remembers looking at the cross as they drove off. Sunlight struggled to break through the dense canopy of the rubber plantation, but Mr Johnson said suddenly a ray of sunlight burst through, lighting up the white painted cross.

The cross was built by corporal Barry McAvinue, who built it with concrete and with steel he’d found by the roadside.

He didn’t know what his construction would come to represent.

Mr McAvinue said it was very emotional to see the cross on Friday.

“When I left the cross there, I expected it to be blown up in about two or three days by the Vietcong,” Mr McAvinue said.

“A bit emotional today to see it here and what they’ve done to it.”

The memorial will hold a last post on Saturday at 5pm for an Australian air crewman, O’Brian Cedric Ignatious Phillips, who died in 1968, to mark Vietnam Veterans’ Day.