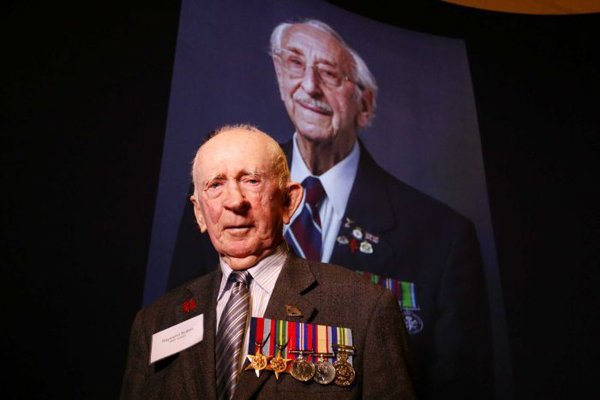 Thousands of surviving World War II veterans have been immortalised in the largest photographic project ever undertaken in Australia.

The 6,500 portraits, shot over two years by 450 photographers were unveiled at the Australian War Memorial in Canberra on Tuesday.

The Reflections project documents the veterans in their now-elderly state, but their resilience, dedication, and in many cases larrikinism still shines through.

In compiling the photographs, the Australian Institute of Professional Photography aimed to capture the living history of the world’s deadliest war, before it fades away.

“It’s a great gift to the nation, to see these veterans in their 90s after doing so much service for our country during World War II,” project manager John de Rooy said.

“When you look at the portraits too, you can see in their eyes … you can see their character coming through.

Veteran Raymond Scales was visibly moved when the portraits were unveiled.

“They were great, really something exceptional,” he said.

“It starts you thinking again — it’s so long ago now.”

Brian Hurley felt “awed” when he saw his portrait displayed among the other veterans.

“I served for three years — 18 months active service — and I’m included among those who did a lot more,” he said.

From today, the images will be played on a 16-hour loop in the AWM’s Second World War gallery.

“Already amongst the images that we’ve got … are photographs of men and women, veterans of the Second World War, that have passed on since the photos were taken,” AWM director Brendan Nelson said.

“These are very precious.

For more images from the Reflections project click here.