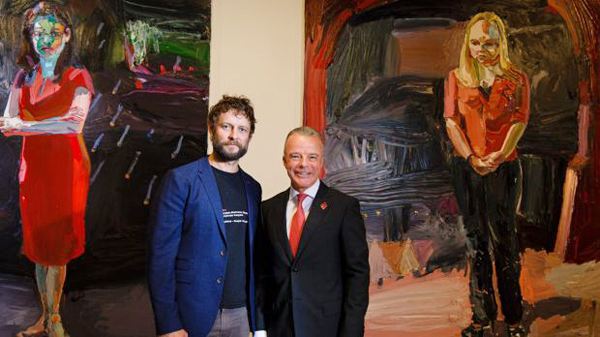 Artist Ben Quilty was in a Chinook helicopter on his way to Tarin Kot in Afghanistan. The well-armed young men around him were tense, they were on their way to a forward operating base, the ride was quiet.

“There I was with a drawing book in my lap, dressed in navy blue, the odd one out,” he said.

“We were flying over an incredible mountain ridge and they told me to look down, and there were two wheel tracks going up the side of this sandy mountain and there on top, laid out in rocks, was a massive, it was about 60 metres long, this perfect image of a kangaroo.”

No one had any idea how the kangaroo had got there, but on the return to base later that day Quilty, who was in Afghanistan as the Australian War Memorial’s artist in residence, was introduced to Simon Payne. His fellow soldiers thought if anyone would, Simon would know the answer.

“I went to his bunk and he had hundreds and hundreds of drawings that he’d been making ever since he arrived in Afghanistan,” Quilty said.

“Simon was a real centre for a lot of the young men and women I met in Afghanistan. Even though it was his private bedroom, it was a very peaceful place, all of the guys I met knew of Simon’s drawings, the poetry of his drawings.

“But even Simon didn’t know who put that kangaroo there on the side of that mountain.

“I hope whoever made it hears about this prize, there was a creative bone in that group of people.”

Quilty was speaking at Wednesday’s launch of the Napier Waller Art Prize, the first ever national art prize offered exclusively to defence personnel.

The $10,000 prize is open to all current and former defence personnel and aims to promote the healing potential of art for servicemen and servicewomen and to raise a broader awareness of the military experience and the impact of service on the individual.

Australian War Memorial director Dr Brendan Nelson said he was proud the memorial and key stakeholders were able to develop such an important program that would give a voice to defence personnel.

“Art has been shown to play a critical role in the healing and recovery of returning service personnel. It is extremely important that veterans have an outlet for how they can process what they have seen, and what they have experienced,” Dr Nelson said.

The seed for the program came from Ian Drayton, general manager of the University of Canberra’s Faculty of Arts and Design. A former corporal in the Army, Drayton was awarded a Churchill Fellowship in 2017 to look at the ways the creative arts can aid in the recovery from combat-related post traumatic stress disorder.

He has been running a program at UC for four years called Arts for Recovery, Resilience, Teamwork, and Skills which provides creative arts workshops for current serving wounded, injured and ill defence force members.

The prize is named after artist Napier Waller, who was severely wounded while fighting at Bullecourt in World War One, and later had his right arm amputated. Waller went on to design the artwork in the memorial’s Hall of Memory and make a significant contribution to its art collection.

Along with the cash prize, the winning entry will be displayed at the memorial and accessioned into the national collection. The winner will also have the opportunity to be personally mentored by Quilty.

Entries are open between June and July this year, and the winner will be announced in late September. For more details head to awm.gov.au