January 15th, 2021 | Browse other: News. | Tagged with: Advance Australia Fair, An Australian anthem for the ‘one and free’ | 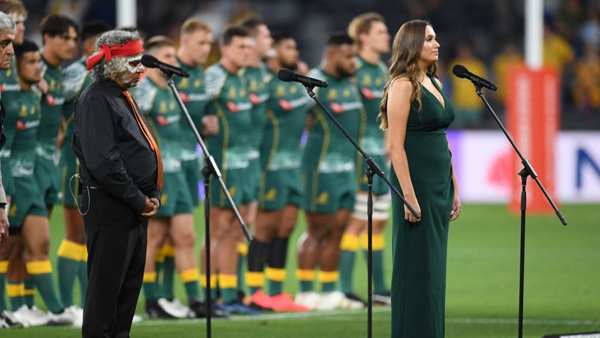 Dean Kalimniou, An Australian anthem for the ‘one and free’, Neos Kosmos, 11 January 2021

Superannuated Neos Kosmos writer and culinary doyen Dimitris Tsahuridis was, in the days before his cultural castration, wont to enter supermarkets of his choice, stand before the fruit aisle and launch, in his light, aesthetically pleasing baritone, into the strains of “Australians All Let us Rejoice…” to the mystification of fellow shoppers, since, by coincidence or celestial design, those supermarkets would invariably be patronised by newly-arrived fellow citizens possessed of less than a nodding acquaintance with our glorious national anthem. To this day, I cannot enter a Woolworths without being gripped with the irrepressible desire to belt out the second stanza of our national ode: the one no one can ever remember.

Try as they might, and the magnitude of their efforts are, admittedly, questionable, the administrators of this great continent have, ever since the official institution of the ditty as our official anthem by Gough Whitlam in 1974, not been able to engrave the words of our country’s canticle into the hearts of its non-English speaking in origin citizens. Ample proof can be provided at the annual Antipodes Festival, the Independence Day March, or even the Cyprus Rally, where everyone, even fourth-generation Greek-Australians exhibit the ability to lisp each and every word of the Greek National Anthem, but no one seems to know the entire words to the Australian one, except perhaps, for Kaiti Georgiou.

Those who blame the orchestration advance a prima facie plausible argument. After all “Advance Australia Fair” was composed in 1878, in the era of the Music Hall and Gilbert and Sullivan, hardly a melodic heritage shared by First Peoples, or post War immigrants to the country. Yet, the equally inane music to the Greek National Anthem, was only composed a decade before, in 1865, by Mantzaros, who specialised in light Italian operas. Shades of Verdi notwithstanding, the strains of the Greek anthem continue to tug at the heartstrings of diasporan Greeks like no other song except maybe, the Υπερμάχω hymn to the Theotokos, the melismata of which have, before my eyes, reduced tattoo-branded, unshaven, snarling muscular gentlemen of limited spelling skills, into quivering sensitive, genuflecting softies. And that is merely the back-up vocals.

It is for this reason that I have come to realise that my erstwhile exhortation, to the august Dimitris Tsahuridis that perhaps his patriotic skills would receive a better reception among our tribe if the Australian National Anthem were translated into ecclesiastical Greek and chanted as a troparion, or in a plagal of the fourth tone kontakion, in the form proposed above, will do nothing to win the hearts and minds of the Greek-Australian populace, even if it does inculcate within them, superficial sentiments of awe and reverence. For the problem does not appear to lie within the music.

Recently, a close friend opined sagely that the only way that “Advance Australia Fair,” or indeed any other anthem that may replace it in the future can gain the acceptance of and properly move those who do not belong to the dominant cultural group, is if its verses were translated into every single community language, including Modern, as opposed to koine Greek (although my argument, that more Anglo-Australians are conversant with koine, rather than the modern form still stands), and that these translations, be also afforded equal status with the English version, so that each group could feel just as Australian singing the anthem in their own tongue. This would, if it were effected, encapsulate the essence of multiculturalism, in that it would demonstrate that the pathways to the Australian identity can assume many linguistic forms, without excluding or privileging any. It would also occupy the minds of generations of ingenious students, tasked with the pursuit of composing smutty parodies, in their mother tongues.

Neos Kosmos, in an article of 4 January 2021, postulated a plausible modern Greek translation of the anthem, in its recently amended form: «Αυστραλοί, ας ευφρανθούμε όλοι/ Επειδή είμαστε ενωμένοι και ελεύθεροι/ Έχουμε τη χρυσή γη και πλούτο για την εργασία μας…» By rights, this Greek version should cause us to stand ramrod straight, hands over hearts, our chests swelling in pride at our musical inclusion within the broader fold. And it was when reading this translation in my own language, where I was able, like never before, to appreciate and weigh the significance of each and every word, that I finally realised why the Australian National Anthem, has made me feel so uneasy every time I hear it, and so apprehensive, every time, I am compelled to sing it.

The sentiments of this anthem, its aspirations, say nothing of the Native Peoples of this country. They in no way mention the violent occupation of the continent and the assumption by the dominant cultural group of a sovereignty that was never ceded to it, not by its “traditional owners,” according to the platitude we all now have been trained to mouth, but rather, by its rightful owners. We may not be able or willing to turn the clock back, but if we truly empathise with the First Peoples of this country and acknowledge both their suffering and their loss, the least we can do is to encapsulate this in our foundation hymn. By not doing so, and singing this anthem, we, the constituent ethnic groups who arrived in this country at the behest of the usurping dominant cultural group, and who organise ourselves, express and manifest our ethno-cultural heritage in forms mandated and prescribed by that same dominant cultural group, acknowledge as legitimate, their sovereignty over this land and as such, are complicit in the usurpation of the hegemony of Australia’s First Peoples and the effacement of the violent nation of this act, as a continuing process.

Viewed from the perspective, Advance Australia Fair is the mirror image of the Greek National Anthem. Whereas the Greek National Anthem constitutes a re-assumption of sovereignty in the face of violent occupation, the current Australian National Anthem is one that comes after conquest, accepting such violent conquest by not mentioning it, and in its aftermath, inviting all and sundry to rally and espouse the aspirations of the conqueror. These are sentiments that stand in diametric opposition to the Greek people’s understanding of nationhood and to expect us to subscribe to them, is to force upon us, the completely alien dominant cultural ontopathology, one compounded by the fact that this group have, in certain times of our history, also fought for our motherland’s freedom.

The recent amendment to Advance Australia Fair, is thus deeply disquieting. In the previous (more honest) version, the dominant cultural group had no qualms in admitting that they were newcomers to this land, (“for we are young and free”), and chronologically speaking, so were the rest of the migrant groups. The amendment of this verse (“for we are united and free”) assumes or rather demands a unanimity of purpose understanding and participation within the broader social fabric that we cannot all possibly share. It elides the issue of appropriation and asserts a discourse in which all others coalesce around and serve that of the dominant group. Rather than accommodating and respecting our First Peoples, the new wording re-enacts their subjugation and disarms any of their claims for redress, restitution or reconciliation. It silences their history. It obscures and marginalises their own conception of country. In this Anthem, the discourse appears to be conducted in the language of the dominant culture, by segments of the dominant culture, with the terms of reference and values developed and imposed by those segments of dominant culture, for the purposes of the perpetuation of the dominant cultural hegemony, with that dominant culture determining, as always, who will be included or united, whose experiences will be left unmentioned and what form any lip service to those who have been disenfranchised and subjugated will take.

The reason why this is so is mystifying since so much work has been done to recognise the suffering of the Stolen Generation and to acknowledge Native Title in this country. There is a broad consensus in Australia, that the First Peoples are vitally important and must be recognised as such. Having such vital issues unaddressed in our National Anthem, is therefore an anomaly. Migrant communities, especially our own, whose modern identity has been framed by regenesis in the wake of violent invasion, conquest and genocide, are placed in an embarrassing position. We cannot be complicit in the obfuscation of history, even if this is undertaken by those who abrogated to themselves the right to allow us to settle here, for we know that this right was illegitimate. In this respect, it is fascinating to consider that the word ἰθαγενής, which we use for “native” or aboriginal literally meant “straight-born,” in ancient Greek. According to Plato, it bore connotations of legitimacy, a fascinating semantic link to the campaign to acknowledge Australian First Peoples in the constitution.

We look forward to a time when our Anthem truly reflects already existing broad societal consensus about who we are, and the complexity of how far we have come, so that ἐν ἀγαλλιάσει ἄσωμεν: Aὐστραλίς, προάγου περικαλλής.