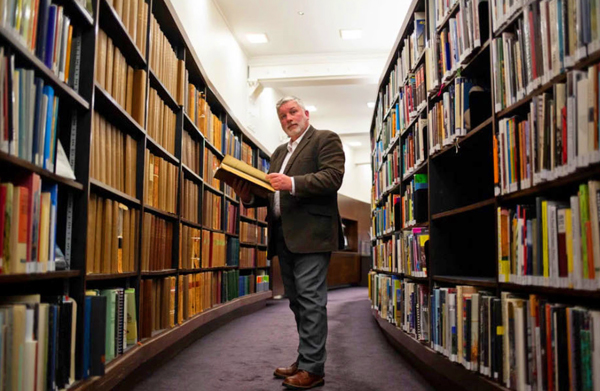 Mike Dickison, New Zealand’s first Wikipedian-at-Large, in the library of the Auckland War Memorial Museum. “If I find something I’m passionate about, I need to share it and get other people involved too,” he said. Credit: Cornell Tukiri for The New York Times.

AUCKLAND, New Zealand — In the grand library of the Auckland War Memorial Museum on a Saturday morning in August, a small group of new and slightly nervous Wikipedia editors gathered for a day of training that would arm them to tackle New Zealand’s lackluster representation on the crowdsourced online encyclopedia.

Leading the so-called Wikiblitz was New Zealand’s official Wikipedian-at-Large, Mike Dickison, 49, who has in some senses been preparing his entire life for this post. As a collector of things and knowledge, he has pursued a string of enthusiasms, beginning with insects, shells and feathers (he put together his own museum as a boy), then giant flightless birds (a Ph.D. on those), that ended, appropriately enough, with a job as the natural history curator at a museum. He once taught a class in knitting as therapy for stressed-out men after a major earthquake.

For the moment, he was involved in something a little less fascinating, guiding the group through the process of adding photos from the museum’s collection to pages on Wikipedia. The new editors — curious members of the public, many of whom had created their accounts the evening before — were mostly women, a fact Mr. Dickison was pleased to note; Wikipedia records its editors as 90 percent male.

“Be bold! Don’t be stymied by worry,” Mr. Dickison told the group, assuring them that early in his Wikipedia career, he had accidentally “blanked” more than one entire page by mistake.

As the country’s roving Wikipedian-at-Large, he is spending a year coaxing New Zealanders to take up volunteer editing on what is the world’s fifth-most-visited website. His salary and travel are funded by a grant from the Wikimedia Foundation, the nonprofit that runs Wikipedia, as part of its investment in “emerging communities” on the site, including New Zealand.

The South Pacific country is underrepresented on Wikipedia, and Mr. Dickison described the state of many of the country’s pages as “dire.”

His skills are self-taught, but Mr. Dickison’s affinity with Wikipedia’s gathering of community knowledge is the culmination of his lifelong obsession with collecting. Growing up in Christchurch, on the South Island of New Zealand, the son of an apprentice boilermaker father — who later ran a sporting goods store — and a homemaker mother, Mr. Dickison felt he was “destined” for a museum curator’s job.

What started as a typical childhood infatuation with dinosaurs developed into a fascination with the moa, a giant flightless bird native to New Zealand, which is now extinct. Mr. Dickison’s father, who had left school at 15, encouraged his son’s enthusiasm for curating. He built the glass display cases where his son could display his treasures in his “museum.”

Even then, Mr. Dickison was irked by the lack of available information about New Zealand’s native fauna.

His preoccupation with the moa led Mr. Dickison to complete a Ph.D. on the subject of giant flightless birds at Duke University decades later.

“I had no idea where North Carolina was or any fact about it whatsoever,” Mr. Dickison said. “The only Duke I knew was ‘The Dukes of Hazzard.’”

The appeal of giant flightless birds, to Mr. Dickison at least, seemed simple: “They’re just enormous. They’re really big. I mean, why do kids like dinosaurs? Because they’re huge.”

He dreams of traveling back 1,000 years to see the moa in its natural New Zealand habitat before it was wiped out by Polynesian settlers 500 years ago. He has even investigated the taxonomic origins of the “Sesame Street” character Big Bird (his conclusion: a giant flightless crane).