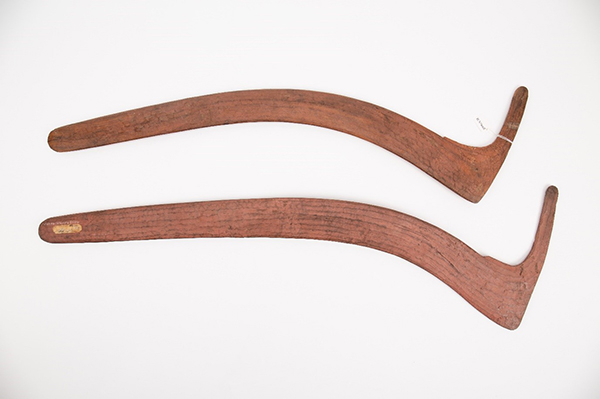 Discussions between AIATSIS, the Warumungu community of the Northern Territory, and Tāmaki Paenga Hira Auckland War Memorial Museum have opened the way for four objects of significant cultural interest to return to Australia in the near future.

The objects were collected by the well-known anthropologist Baldwin Spencer, who worked with Warumungu people alongside Francis Gillen in the early 1900s, and James Field, the telegraph operator at Tennant Creek. Spencer and Gillen amassed a vast collection, over 6000 items, of ethnographic material from Central Australia that is now dispersed in numerous institutions across the globe.

This return of four Warumungu objects is the result of ongoing work by the AIATSIS Return of Cultural heritage (RoCH) team to identify cultural materials held in collections outside of Australia and to initiate discussion on their return.

In September 2021, the AIATSIS RoCH team facilitated a virtual meeting with senior Warumungu men and with Kaumatua Robert ‘Bobby’ Newson, Tumu Here Iwi Relationships Manager, and curatorial staff at Tāmaki Paenga Hira Auckland War Memorial Museum to discuss the significance of these objects. In June 2022, the museum’s Trust Board endorsed a repatriation request and research report summitted by AIATSIS and the Warumungu men, the result of two years of consultation and research.

‘They [the artefacts] been taken away before us, but we know that they belong to Warumungu people as the new generation,’ Mr Jones said. 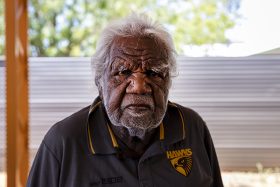 In the course of consultations, Warumungu men spent numerous hours poring over the photographs of the material in the Auckland collection. The wartilykirri (hooked boomerangs) generated considerable discussion. As the Warumungu men explained:

‘You can go all around Australia and you will see that bit [the notch beneath the curve] … I used to see my old father make them.

‘These old ones they’re really different, really thick. See this boomerang … it must have taken him six months or even more. He would carry it around every day and if he got bored, he would start again. That’s how much patience they had. Until he got it right. Most of them boomerangs were passed to the next generation. It’s a precious thing.’

‘The return of Warumungu cultural heritage material is fundamental to the processes of truth-telling and reconciliation,’ Minister Burney said. ‘It supports the transfer of knowledge, cultural maintenance, restoration and revitalisation for future generations.

‘I commend AIATSIS for the work it has undertaken with the Tāmaki Paenga Hira Auckland War Memorial Museum to negotiate the unconditional return of this important material. I would also like to extend my heartfelt gratitude to the museum for the good-faith return of these items – a move that recognises the importance of cultural heritage to identity.’ 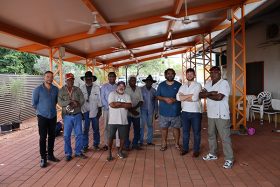 The AIATSIS CEO, Craig Ritchie, noted that the underlying principle of the RoCH program is to restore agency to First Nations communities in Australia.

‘Our cultures have found enthusiastic audiences in other countries,’ Mr Ritchie said. ‘While these four Warumungu objects were freely given by community members to visiting collectors, there needs to be recognition that many sacred and secular objects that illustrate our cultures were generally removed and relocated without our consent.

‘As well as alerting communities to their cultural heritage held in offshore collections, the AIATSIS RoCH program aims to help those collecting institutions to understand and to respect the wishes of the source communities.

‘Our thanks to the Tāmaki Paenga Hira Auckland War Memorial Museum and their people for the respect provided for these objects while in their care.

‘Our thanks also to the mana whenua of Tāmaki Makaurau (Auckland) for the care and respect they have provided for these objects while they remained on their homelands.’

For the museum, the matter is quite clear-cut.

‘Auckland Museum seeks to reconnect descendants with their taonga,’ said museum CEO Dr David Gaimster. ‘Repatriation is key to ensuring these taonga can be reunited with the Warumungu community.’

Warumungu people are the traditional custodians of land in and around the township of Tennant Creek, Northern Territory.

The RoCH team plans to travel to New Zealand later this year with a delegation of Warumungu representatives to collect these materials. Those representatives will participate in hand-over ceremonies and other protocols with local Māori communities.

The Warumungu community has indicated that a selection of these returned objects will be displayed at the Nyinkka Nyunyu Art and Culture Centre in Tennant Creek.