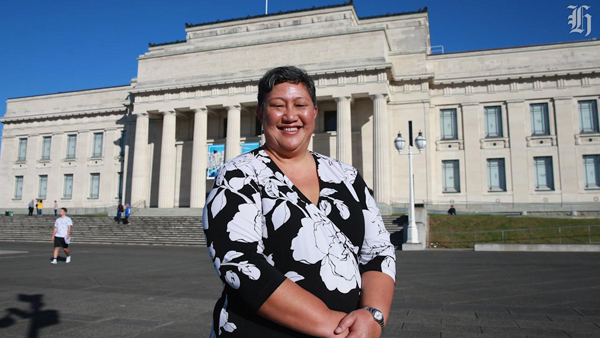 Ms Atimalala becomes the first woman elected as Chairperson of the Auckland Museum Trust Board, as well as the first Chair of Pasifika heritage.

A member of the Auckland Museum Trust Board since 2001, Dr Randall has elected to step down from the role, after spending the last 10 years serving as Chairperson. Dr Randall had originally planned to retire from the position in October 2017*, however agreed to serve an additional six months to transition in the new Chief Executive, Dr David Gaimster.

His long and exemplary service to Auckland War Memorial Museum was acknowledged on the national stage in the New Year Honours in 2017, when he was awarded the New Zealand Order of Merit for services to museum governance.

“Dr Randall’s steady stewardship of Auckland Museum over the last decade has been a testament to his experienced and considered approach, and his contribution to our Board will be missed.”

“Orchid is an advocate for the unique and leading role the Museum plays in shaping the cultural identity of Tāmaki Makaurau,” Dr Randall said.

“With more than five years on the Museum’s Board, and a proven track record in strategic advisory and governance, this is a solid appointment that signals continuity and stability for the future of the Museum, and the stewardship of its Five Year Strategic Plan.”

Ms Atimalala has an extensive background working with local government organisations, including the North Shore City Council and Auckland Regional Council. She is a member of the New Zealand Planning Institute as well as being a Certified Independent Hearings Commissioner.

She has held positions on a number of boards, including as Deputy Chair of the Pacific Peoples Advisory Panel and a member of the In2it Youth Development Trust Board. Orchid is a fluent speaker of Sāmoan and a mentor for the Beatrice Faumuina Leadership Trust.

Mr Corban is an experienced Director, having served on the Auckland Museum Trust Board since 2012. He has significant governance experience on boards at a local, regional and national level, including as former Chair of Genesis Power and Radio New Zealand. Brian is a Distinguished Fellow of the Institute of Directors, and Fellow of the New Zealand Institute of Management.

An experienced former Chief Executive with a background in construction, property development and asset management, Mr Binns will provide added strength to the Museum’s governance particularly at this juncture with the Museum’s capital works programme about to accelerate.

The Auckland Museum Trust Board is a ten member Board, with five members appointed by Regional Facilities Auckland (RFA), four by Auckland Museum Institute (AMI) and one by Taumata-ā-Iwi. Mr Binns fills the vacant AMI appointment previously held by Dr Randall.