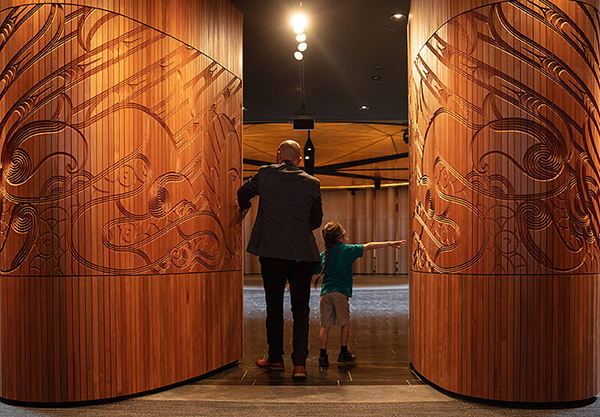 The award-winning redevelopment of Te Ao Mārama in the Public & Institutional Spaces category.

This revitalised space revealed the most significant changes to the Museum in more than a decade, and the vision was realised by Jasmax with FJMT, designTRIBE, and Salmond Reed Architects. The new spaces and the artworks housed within them were recognized in many different categories:

Situated within Te Ao Mārama, Under the Tanoa is a looping animated audio-visual experience that shares the arrival of the three Mana Whenua iwi that make up the Museum’s Taumata-ā-Iwi. This experience contains the stories of Ngāti Whātua Orākei, Ngāti Paoa and Waikato Tainui, told by iwi, complete with rich soundscapes, waiata and animated visuals. It was created alongside iwi by the team at Creature Post.

In the entrance to Te Ao Mārama, artist Graham Tipene has created a tomokanga, a pōwhiri threshold and gateway. Te Tatau Kaitiaki (The Guardians’ Gateway) has been incised into two doors attached to the pillars that the visitor moves through as they enter and exit the space. The doors play a ceremonial role as part of the tikanga of the space, and depict two female figures, embodying the traditional voice of karanga or welcome.

Along with the significant changes to Te Ao Mārama, Kahu Tāmaki was a finalist in two categories Large Brand Identity/Cultural and Toitanga. Kahu Tāmaki, the wardrobe project designed by Nichola Te Kiri, revamped the Museum’s front-of-house Visitor Host uniforms to allow them to feel more connected to their workplace.

Auckland Museum was also a finalist twice in the Digital Installation & Exhibition category for the digital interactives in Tāmaki Herenga Waka: Stories of Auckland. Opened in 2021, Tāmaki Herenga Waka is a new permanent gallery that chronicles Auckland’s past and present and looks to the future. The two digital installations were Kei konei koe You are here created with Toybox, and Raurau Mai Living City created with OOM Creative.

Auckland Museum, a finalist in a total of ten categories, last night took home the Best Awards for:
• the redevelopment of Te Ao Mārama for the Public & Institutional Spaces category;
• Te Tatau Kaitiaki for both Exhibition & Temporary Structures and Environment graphics.

“To win these prestigious Best Award categories is an exceptionally proud moment for Auckland War Memorial Museum,” says Dr David Gaimster, Chief Executive of Auckland Museum. “To have the Museum’s transformation recognised by these awards truly celebrates our place in the culture and cultures of 21st-century Tāmaki, Aotearoa and the Pacific.”

“The Public & Institutional Spaces award recognise the achievement of Te Ao Mārama to respect the Museum’s value, while integrating bicultural concepts that deepen engagement with the Museum’s collections and stories,” says Gaimster. “The South Atrium has been given greater cultural dignity, transforming it into a generous public precinct where all visitors are welcomed with manaakitanga.”

The New Zealand Design Institute Best Awards were established in the mid-1970s to celebrate New Zealand’s best graphic design. The New Zealand Best Design Awards has enabled a growing community to benefit from the experience of a jury of international peers.