The pygmy pipehorse is 6cm long and closely related to the seahorse Photograph: Irene Middleton @seacologyNZ.

A tiny candy-stick coloured pygmy pipehorse, discovered in a small area off New Zealand’s north coast has been given a Māori name by the local iwi (tribe) – in what is believed to be the first time an indigenous group has formally named a new species of animal.

The 6cm long fish is closely related to the seahorse, and inhabits the rocky reefs off the north-east coast. It is the first pygmy pipehorse discovered in the country.

Cylix is a new genus name and is derived from the Greek and Latin word for a cup or chalice; it refers to the cup-like crest on the top of the head of the new species.

The second prong of the name tupareomanaia refers to “the garland of the manaia” – “manaia” is the Māori name for a seahorse and also means ancestor, or tupuna.

The Ngātiwai tribe said it was pleased to have gifted the new species a name.

“The naming of this taonga [treasure] is significant to Ngātiwai as we know there are stories from our tupuna about this species, but the original name has been lost as a result of the negative impacts of colonisation,” a Ngātiwai tribe kaumātua (elder) Hori Parata said. 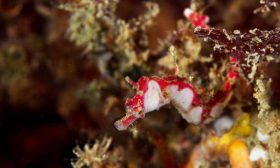 The tiny creature was first sighted off the New Zealand coast in 2011 Photograph: Irene Middleton @seacologyNZ.

Dr Trnski from the Auckland Museum said it was a privilege to be able to incorporate mātauranga Māori (knowledge) into the naming process.

“As far as we know, this is the first animal in the world to have the naming authority include a tribal name. It is overdue recognition of traditional knowledge that can contribute to the discovery of new species.”

Cylix tupareomanaia had been observed by divers at the Poor Knights Islands Marine Reserve in 2011, when it was initially thought to be the rare seahorse species Hippocampus jugumus.

But when a photo was posted on Facebook in 2017, Short recognised it as possibly new, and Trnski joined him in the effort to confirm that it was a new species.

The authors of the new name, Short, Trnski and Ngātiwai, will be permanently linked to the species name, as required under the International Code of Zoological Nomenclature – the rulebook for naming new species.