You are here: Home » Articles filed under: 'News' » Article: 'AWMM opens up on love, loss & anguish' 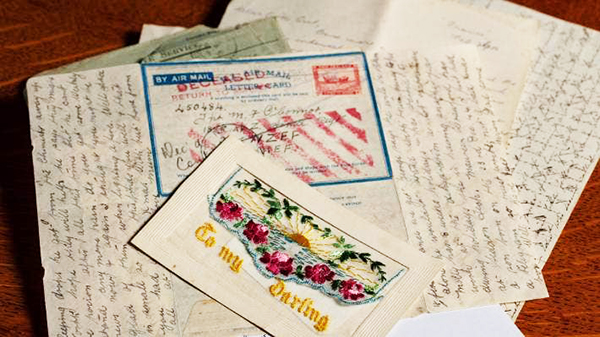 Emily Dickinson once wrote how a letter seemed like immortality.

And the poet’s early 19th century musings ring especially true within the confines of the Auckland War Memorial Museum, where hundreds of letters, cards, emails and text messages make up its latest exhibition, Love and Loss.

The artefacts memorialise conversations had between distant lovers, friends, and families – from the early 1800s to the present day.

Some deliver tales of love, like the coded telegrams that kept a transoceanic romance alive, or the birthday card sent back and forth between father and daughter for more than 20 years.

Others navigate the perils of grief and heartbreak, like the Facebook messages sent from a daughter to her deceased mother, or the affair-ending poem left on a car’s windscreen wiper. 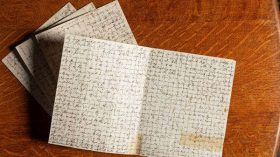 The various methods of communication range from letters and telegrams to texts and coded messages. Auckland Museum/Stuff.

“Each story is unique and special, but together they all tap into that universal experience of love, loss and anguish”, says Nina Finigan, Curator Manuscripts at the museum.

Finigan had pitched the idea in 2019, but it wasn’t until the year after, upon the advent of the global pandemic, that things truly began to gain momentum. It had felt like a ‘life imitates art’ moment, she says.

“The content of the exhibition was already embedded in separation, communication and relationships, and then, suddenly, we’re in lockdown and living in a time when everyone is scrambling to find new ways to communicate with one another.”

The pandemic prompted Finigan and the museum’s interpretive planner, Kavi Chetty, to issue a public call-out for letters, emails and messages.

Over a hundred personal submissions were added to the museum’s historical manuscripts and letters, some of which were turned into audio recordings or moving short films. 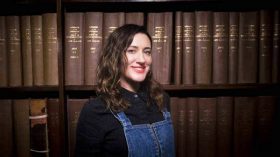 The public inclusions ensured that more modern-day means of communicating were exhibited.

One of Chetty’s favourite submissions had been from a man who sent supermarket care packages to his budding inamorata while she was in lockdown, with notes and comics scrawled onto the underside of receipts.

Elsewhere, Tinder messages, Instagram DMs and texts offered a glimpse into how epistolary romance has seeped into the digital world.

Often those who mourn the lost art of letter writing can be quick to disparage contemporary communication.

Some argue that by professing emotion via text, Facebook message or tweet, it removes the sentiment from the act, or that Whatsapp messages that can be frittered away will never compete with the tangible letter.

By putting these modernistic methods of messaging alongside written letters in the exhibition, Finigan says she hopes it will encourage the public to “think about how they are no less important”.

Chetty maintains that messages now are more immortal than they ever were.

“People say that we don’t write letters like we used to, and everything is so transactory now, but the more you look at it, the more you see that we actually produce deeply meaningful messages, and more of them now than we ever did in the past,” he says. 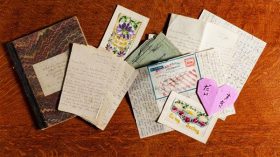 The exhibition uses manuscripts from the museum alongside contributions from the public. Auckland Museum/Stuff.

He points out that communicating via digital means ensures we archive our lives and relationships even when we’re not making a conscious effort to. Text messages and Facebook chats sit pristinely preserved within phones.

Anyone who has waded through bygone text exchanges with an ex-partner, or who has stumbled across social media messages with timeworn friends, will understand how conserved messages can relight emotions and keep memories eternal.

If there’s one thing that can be learned from this exhibition, it’s that epistolary in all its various forms continues to provide the antidote to the ephemerality of life. 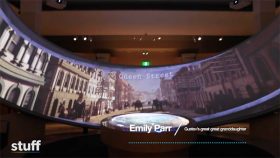 Some modern-day stories told in the exhibition include a Facebook Messenger thread of a husband and wife separated while in the process of migrating to New Zealand from Mexico. Another details the patching up of friendship on Facebook by two friends who haven’t spoken in over a year.

Within the Love & Loss exhibition, there are no celebrities highlighted or great world events documented. Instead, regular people from all walks of life are reflected. That way guests are more likely to find something they can connect with, and in turn be encouraged to see the importance in their own conversations.

For those inspired to put pen to paper the exhibition has installed two writing booths, where visitors can write their own notes and send them, with a specially curated gilded stamp from New Zealand post, or – for those messages that are better left unsent – shred them to oblivion.

“It’s worth noting that this is not an exhibition about important letters, from important people or about important events,” says Chetty. “It’s just about everyday people who aren’t necessarily thinking about what they are creating when writing this stuff down.”

Written in the absence of thought these messages, whether letter, Tinder exchange or telegram, provide a window into the lives and relationships of the authors that is crystalline, rather than fashioned from rose-tinted glass.

In the early 1800s, when Dickinson compared a letter to immortality, she said it was because a letter was like the mind alone without corporeal friend.

Almost two hundred years on and the sundry of written communication still provides that same, accurate glimpse into the thoughts and emotions of the sender, which will remain perpetually embalmed as long as the message lives on.