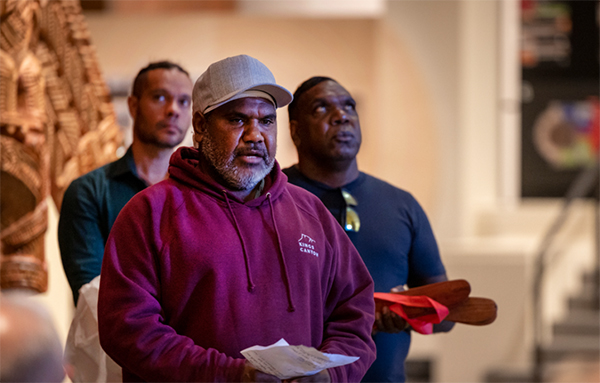 A ceremony in Auckland on Monday saw the formal departure of material of significant cultural interest being returned to the Warumungu community, the Traditional Owners of land in and around Tennant Creek in the Northern Territory, from Tāmaki Paenga Hira Auckland War Memorial Museum.

The four items, a palya/kupija (adze), a ngurrulumuru (axe/pick), and two wartilykirri (hooked boomerang), were collected over a century ago by anthropologist Walter Baldwin Spencer, who worked with Warumungu people alongside Francis Gillen in the early 1900s, and James Field, the telegraph operator at Tennant Creek.

On Monday morning the iwi of Tāmaki Makaurau (local people of Auckland) greeted the Warumungu delegation with a pōwhiri (welcoming ceremony) to initiate handing back responsibility of these treasures to their original owners.

Warumungu man Jimmy Frank spoke of the importance of the occasion.

“These objects left our country 120 years ago,” he said.

“In those artefacts there is signatures that are Warumungu. When I look at that I find that it’s important because the signatures – that artefact that I’m seeing today 120 years later – the similarity is there.

“My grandparents made this out of rock, today I’m using a steel axe and a grinder. But the significant shape, the signatures are still the same today, even though we are living in two different eras. But it’s still there.”

“We might live in different worlds today but we still the same people,” he said.

“Today’s a very unique day, a unique and historical moment. This object could have been anywhere in the world but it’s with the Māori people. And the Māori people, their cultural practice and their beliefs are very similar to us.

“And the Māori people, I believe, they take a lead in repatriation and also in a treaty. That’s First Nations people taking control of their country and their culture.” 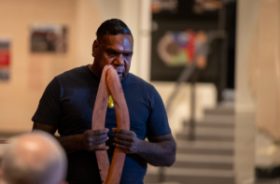 The items, now on their way back to their true owners, were among more than 6,000 artifacts collected by Mr Spencer and Mr Gillen in central Australia.

The items were dispersed in institutions around the world.

“We’ve looked after these taonga like they are our own and we are proud to be returning them to the Warumungu people on this momentous day.” 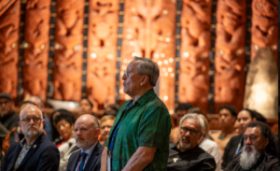 Museum chief exeuctive Dr David Gaimster said that handover was a demonstration of the values of the institution.

“Auckland Museum seeks to reconnect descendants with their taonga,” he said.

“These items of cultural significance are being unconditionally repatriated to the communities who created them and will be returned to their Country and stored in their keeping places indefinitely.” 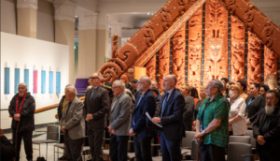 AIATSIS has been working with the Warumungu community since 2019, and in March last year facilitated talks on the future of the four items between senior Warumungu men and the Tumu Here Iwi Relationships Manager and curatorial staff at Tāmaki Paenga Hira Auckland War Memorial Museum.

In June 2022 the Museum’s Trust Board endorsed a repatriation request and the agreement on the return was announced publicly in September.

Minister for Indigenous Australians Linda Burney said it was wonderful to see the return of the items to the Warumungu people.

“Taken away around 100 years ago, they will now be carefully carried back to their rightful place, on Country,” she said.