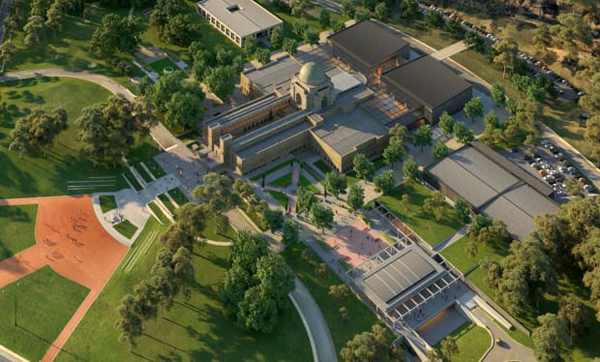 Work on the expansion will take nine year’s and include major new facilities without changing the historic facade.

Prime Minister Scott Morrison, Victoria Cross recipient Ben Roberts-Smith, business and cultural leaders attended the November launch at Parliament House, during which the government confirmed $498 million in funding for upgrades to the historic Canberra memorial, set to increase in size by 80 per cent.

The Australian Financial Review asked for information about an $842,000 contract for a stakeholder function, listed on the government procurement website Austender, prompting War Memorial director Brendan Nelson to confirm Mr Stokes had given permission for his $740,000 donation to be revealed publicly.

Mr Stokes, the longtime chairman of the War Memorial Council, is a well-known benefactor to Australia’s national cultural institutions and donates to a wide range of other charitable causes.

Worth an estimated $5 billion, he has purchased historic Victoria Cross medals for the memorial’s collection and is a former chair of the National Gallery of Australia.

Last year, the Stokes family donated $1 million to fund a fellowship program at the National Library of Australia and in 2015 Mr Stokes loaned his $15.5 million Rothschild Prayerbook to the library, allowing the 500-year-old book a rare period on public display.

Dr Nelson said the $740,000 donation had enabled a fitting launch for the massive upgrade works.

“When I was minister for defence, I was then first introduced to Kerry Stokes’ deep commitment to and passion for the men and women who wear and have worn the uniform of the Australian Defence Force,” he said.

Work on the expansion will take nine year’s and include major new facilities without changing the historic facade.

“He has done and continues to support veterans, veterans’ organisations, families in a myriad of ways that are unknown to the public.

“During my tenure, on more than a few occasions, he has said that he would prefer that the public monies that we have, which are limited, are kept for spending on something else and has met those costs through donations to the memorial.”

Dr Nelson said oral histories and other multimedia included in the launch would be displayed in the redeveloped memorial.

He called on other business leaders and corporations to follow Mr Stokes’ example and support for institution.

“There’s a great debt that this nation owes Kerry Stokes beyond his business and the number of Australians he has employed,” Dr Nelson said.

“His contribution to our cultural institutions, and particularly this Australian War Memorial, is exemplary.”

Mr Stokes strongly backed the redesign plan, despite criticism of its cost, scale and concerns about planned demolition of existing award-winning buildings.

Maintaining the memorial’s heritage-protected facade facing Parliament House, the expansion will see a complete redesign of the lower ground floor and a new underground exhibition hall built to display large items including helicopters and fighter planes.

Visitors will have access to new research facilities, a live feed of defence operations overseas, reflection areas and an interactive display of cenotaphs and memorials around Australia.