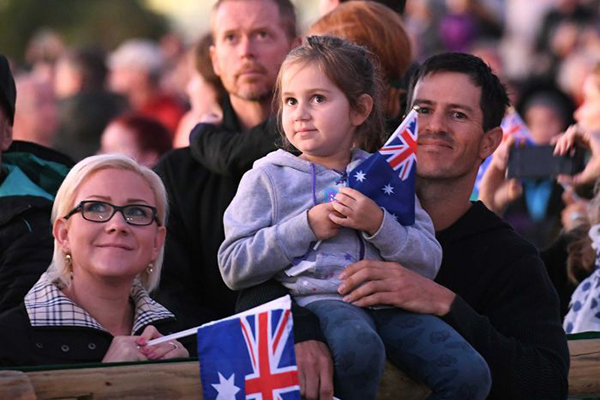 With Anzac services and marches cancelled or closed to the public, Australians must commemorate in a new way. AAP: Dave Hunt.

Kat Jackson does not play a brass instrument, and neither does her eight-year-old daughter, Neve, but they plan to sound the Last Post in their driveway this Anzac Day.

In doing so they will join thousands of other Australians honouring the sacrifices of our armed service members.

Ms Jackson said her family always put a large emphasis on Anzac Day and that this year, with services being cancelled because of coronavirus lockdowns, she would miss the large extended family gathering as well as the community atmosphere.

However, she said she had spent time in isolation helping her daughter learn to play Last Post — normally a commemorative bugle call — on her violin.

Some who have seen a video of their recital on Facebook have said it brought them to tears.

“We are planning for my sister and her son, my daughter and I, my other sister and her daughter, and our mum, all appropriately socially distanced [on the driveway] and playing the Last Post together,” she said.

“It’s humankind coming together, which is a beautiful thing.

“There’s no cultural, social or religious divide for Anzac Day. People can literally stand side by side because we’re united by the same cause.

“Our local dawn service is huge and to not see that this year — I will really miss that.” 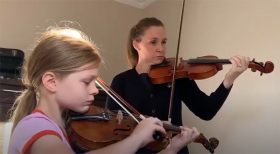 Kat and Neve Jackson will be joining many marking Anzac Day in their driveway (ABC News).

With April 25 fast approaching, and as coronavirus restrictions remain tightly in place, many Australians are considering how they will mark the national day of remembrance and wondering which, if any, Anzac Day services will go ahead.

This year, the ABC will be broadcasting Anzac Day events the public are unable to attend due to coronavirus restrictions in each state and territory.

It will also form part of a live ABC broadcast, starting with coverage of the National Ceremony from 5am.

The service will involve a revised ceremony with no veterans’ march and no members of the public present.

“Anzac Day is a symbolic day for Australians and New Zealanders with the Australian War Memorial being the centre of Australia’s national commemoration,” said Anne Bennie, the memorial’s assistant director of public programs.

“Due to COVID-19 the Memorial is not open to the public and we will be encouraging people to mark Anzac Day respectfully from their homes.”

Ms Bennie said the details of service were being finalised, but that it would give Australians time to “safely pause in their homes, in honour of veterans and the Australian spirit”.

The Department of Defence has also announced that all overseas Anzac services had also been cancelled, tweeting the announcement on Friday afternoon:

“The Australian Government has made the difficult decision to cancel all Australian-led overseas Anzac Day services for this year. Instead we encourage you to #StandAtDawn and watch the live telecast of the dawn service at the Australian War Memorial.” 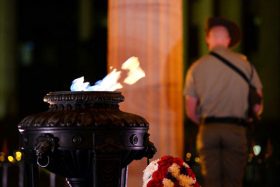 Instead, they have joined other groups in asking Australians to unite in recognising all armed services personnel by standing on their driveways at 6:00am for a combined dawn service.

“As a result of restrictions to this year’s formal Anzac Day commemorations, the RSL encourages people to light up the dawn and remember and pay respects from home,” an RSL South Australia spokesman said.

“This can take several forms including from the end of your driveway or within your home, with a candle or the light on your phone.”

RSL SA said the qualities of the Anzac spirit — courage, endurance, humour, ingenuity, and mateship — were particularly applicable for Australians amid the COVID-19 pandemic.

“The Anzac spirit, which is really just the Australian spirit, helps people in times of crisis,” the spokesman said.

“When you’re experiencing hardship or foul weather, just think about the men and women at war, and serving right now, in discomfort.

“It puts things into perspective — we’ll get by. We’ll get through this.”

The idea for the dawn driveway service was also being promoted by the Aussies & Kiwis for ANZACs Facebook page, founded by veterans and popular for its discussions about the best ways to honour servicemen and women as Anzac Day approaches.

Australian jazz musician James Morrison called on brass musicians to play the Last Post at 6:00am in their driveways on Anzac Day “in the name of mateship”.

In a Facebook video that has been viewed more than 450,000 times, Morrison said while coronavirus restrictions meant Australians could not gather for usual Anzac Day services, “we can still stand united in spirit”.

He said the feeling will be powerful, across the country, “when people hear that song on that morning and know that we’re celebrating Anzac Day as we always do — to remember our Anzacs who fought in all wars”.

Morrison’s posts has garnered a huge amount of support, including from the country’s RSLs, with people pledging to join the campaign.

Phil Murray will be commemorating Anzac Day this year with his wife Gail and grandchildren on his daughter’s rural property in Berry Springs in the Northern Territory.

Mr Murray, who served for five years in the Citizen Military Service, usually starts his Anzac Day by marching to Martin Place in Sydney with “old mates” before leaving to watch the football.

“I normally head off to the Sydney Football Stadium for the Anzac Day clash between the Dragons and Roosters, but not this year,” he said. 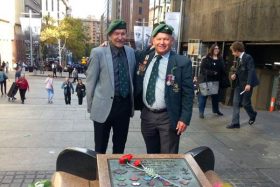