In commemorating the 75th anniversary of the Cowra Breakout, Director of the Australian War Memorial, Dr Brendan Nelson, said the Cowra community’s actions post World War II was an integral part of the current relationship between the two nations. 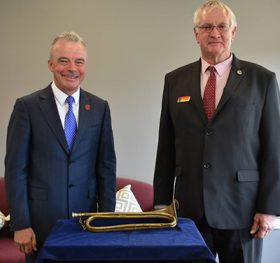 Dr Brendan Nelson and Gordon Rolls with the bugle used by Hajime Toyoshima to signal the beginning of the Cowra breakout.

Dr Nelson said the community’s actions had helped the nation shed its prejudices.

“You have to understand what Australia was like in the 1950s and 1960s, there was at best intolerance towards Japan and Japanese people,” he said.

“With widespread hatred towards them over the treatment of Australian prisoners in Asia and at that time you had people in Cowra, local political leaders, RSL leadership and the broader community who were taking quite a different perspective.

“From the very first act by May Weir of her beneficence to the three Japanese escapees with scones and tea until the authorities came to everything that has happened since, Cowra has lead the nation’s way,” he said.

Dr Nelson said he was uplifted and reassured by the relationship between fostered between Australia and Japan thanks to Cowra.

“There’s so much to commemorate here and so much to celebrate, this community of people has led us to our best inner selves,” he said.

“I said at the mayoral dinner last night, what’s most important is to imbue in young people with an imaginative capacity to view the world through the eyes of other people and that’s precisely what all of this personifies.

“What’s important is how this relatively small community of people have really laid a bedrock for a relationship with Japan which is unbreakable.

“I feel very privileged to be a small part of it and get a sense of it,” he said.

Dr Nelson said often at times commemorative events may feel tokenistic but the respect and reconciliation shown in Cowra was genuine.

“But often there is a sense, and I’ve been in this situation, you’ll go to another country and the leadership will say ‘We the people of this country have this particular view.”

“There are times where you wonder if the average person represented by these leaders actually has that point of view. But when you have real earthy people from regional communities not only expressing that sentiment but acting it out in the most practical ways and sustaining it, in this case, over 75 years.

“That tells you a lot more than anything that will be said by people in capital cities,” he said.