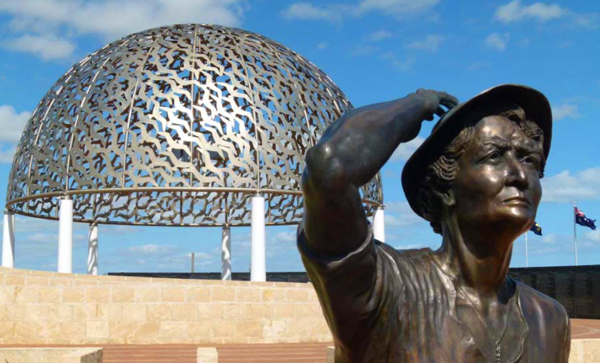 The Waiting Woman in front of the Dome — both elements of the HMAS Sydney II Memorial, Geraldton.

The director of the Australian War Memorial has complained about the “cookie cutter” toilet block proposed for the HMAS Sydney II memorial in Geraldton, backing calls for facilities worth up to $1.2 million.

The dispute has divided the public, with one Geraldton councillor saying it was not worth spending “a million bucks on a grandiose toilet”.

However, stakeholders have referred to the council’s proposal as a shameful “tin dunny” that was insensitive to the pilgrimage site, which attracts 60,000 visitors a year.

Dr Nelson said the new toilet block should suit the ambience of the memorial for the nation’s greatest naval tragedy, which killed 645 people in 1941.

“This national memorial at Geraldton not only pays tribute to them, their courage and loss, but to all those families who bear a pain that cannot forget,” he said. “Any building on the site of the memorial must enhance its reverence and meaning, to every one of us, but especially the men whom it honours. In every way, it should reflect our nation’s pride.

“The council’s plan does not.”

Dr Nelson said the more expensive proposal did reflect the ambience of the precinct.

“Were it to be quite some distance away from the sculpture it wouldn’t matter. If this was a kiosk, tourist information facility or council library it wouldn’t matter,” he said. “But it is not — it is a memorial, a repository of love, meaning and pride. As such, cookie cutter toilets are out of the question.”

WA Veterans Issues Minister Peter Tinley said it was a local government matter but criticised the council for not consulting more widely and genuinely.

“If the Government believes the proposal is unfit we would welcome the WA Government taking the lead in funding and running the proposed facilities in a cost effective manner,” he said.

“It is a shame that while he (Dr Nelson) was the minister responsible for defence he did not see it fit to pay for any toilets up there.”

Councillors objected to the more expensive design partly over cost but also because it was further away for elderly and disabled visitors, and included an element that would compete with the local museum.