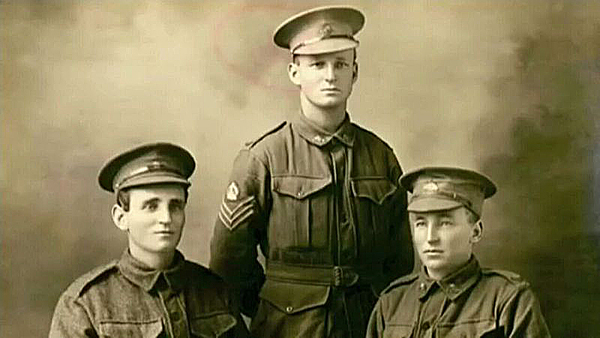 Family’s grief remembered one hundred years after three sons were killed on the same day in WWI, Nine News, 20 September 2017

One century ago today, three brothers died together fighting for the Allies at the Western Front in World War One.

The Seabrook brothers George, 25, Theo, 24, and William, 21, were killed during the opening of the Battle of Menin Road, part of the Battle of Passchendaele that stretched from July to November, 1917.

William was injured by a shell that shattered the platoon he led as a lieutenant.

George and Theo were killed instantly by the same artillery shell as their younger brother was being taken from the battlefield.

William died a short time later – the photo of his mother Fanny that he kept in his pocket, pierced by the fatal fragment.

He was buried in France, in a grave Mrs Seabrook and her husband William Sr would never see.

The brothers hailed from Sydney, and enlisted into the 17th Australian Infantry.

Mrs Seabrook penned an epitaph for William – “a willing sacrifice for world’s peace”.

She later wrote to her local MP, detailing her husband’s “delusions” and the family’s breakdown.

“Having given our three boys as a sacrifice to the country, we will never recover,” she wrote.

The Seabrook brothers and their tragic deaths were the subject of a speech by Australian War Memorial director Brendan Nelson at the National Press Club.

His voice shaking with emotion at times, he spoke of the debt all Australians owed to those who died fighting for their country – a debt not just to the past, but to the future.

“The daily Last Post ceremony at the Australian War Memorial is our offering to give meaning where there is none,” he said.

“It is an expression of loss, suffering and love which reaches within all of us.