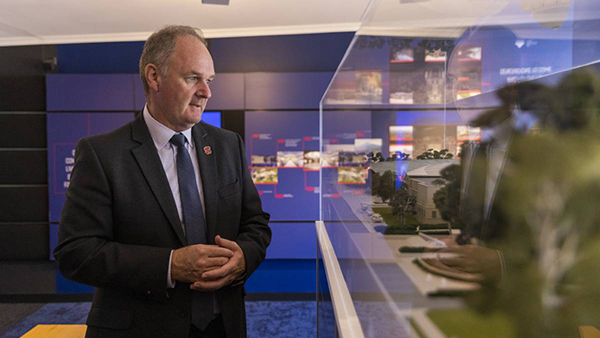 Matt Anderson, leading the Australian War Memorial as it prepares for a proposed $500 million expansion, said the award-winning hall’s replacement would have greater heritage value by increasing the space for stories about the nation’s involvement in conflicts.

His comments follow heritage expert warnings that the project would reduce the significance of the memorial’s commemorative spaces by growing its exhibition areas.

Architects have also campaigned to save Anzac Hall, which won the Sir Zelman Cowen Award for its design excellence in 2005, and describe the building’s planned demolition as wasteful and unnecessary.

In an exclusive interview on Thursday, Mr Anderson said the expansion’s purpose was to recognise the service of veterans from more recent wars.

“The heritage value of Anzac Hall is the stories that are told within it, not the blade wall, and the roof line,” he said, referring to the building’s signature design features.

“We’re just not doing that, we’re not meeting that obligation to be fair to contemporary veterans, modern veterans, in the same way we’ve told the stories of their forebears.”

The memorial’s exhibits on Australia’s most recent military operations are confined to small sections of the institution, which faces a shortage of space for new displays. Its presentation on Australia’s longest military engagement, the war in Afghanistan, is limited to an exit corridor.

Mr Anderson said the memorial expansion, which has also attracted opposition from historians, writers and former public servants, would grow the areas used to show Australia’s involvement in recent conflicts.

“This is about providing the space so that we can recognise the generation of 100,000 women and men who have served in our name in the last 30 years whose stories are not told in the current building,” he said.

“We need to remember why we’re doing this.”

Anzac Hall would be demolished and replaced with a new building and glazed link creating 13,995 square metres of new space during the planned expansion.

Heritage experts – including those contracted by the Australian War Memorial to assess the development plans – have warned the demolition of the hall would have a significant impact on the national and Commonwealth heritage values of the popular institution.

Documents released under freedom of information laws also show a Commonwealth department assessing the proposed expansion’s impact on the memorial warned the changes would obscure, alter and diminish its heritage values.

The Department of Agriculture, Water and the Environment said the addition of three large new spaces for exhibits, visitor services, functions and events would reduce the significance of the main building and commemorative spaces.

“They are reduced both by the increased scale of exhibition spaces relative to the size of the site as a whole, which outweighs and pulls focus from the commemorative spaces,” it said.

“While the exhibition spaces contribute to the commemoration of war, it is their combination with the building and commemorative spaces that makes the AWM significant in Australia – it serves not only as a museum, or a commemoration space, or a place of architectural excellence, but an equal and complimentary balance of all three.”

Asked about the balance between commemoration and exhibition spaces through the planned expansion, Mr Anderson said “the entire project is about balance”.

“What we are seeking to do, is rather than doing this piecemeal … we’re actually seeking to do it at once to minimise the impact on the visitor, to maximise the value for money for the Australian taxpayer, and do these things in an eight-year window,” he said.

“It’s certainly very ambitious but it’s also the best way to do it from a project management sense.”

Mr Anderson said the memorial and its council were confident in the new design.

“Everyone’s talking about what’s being replaced but not what we’re replacing it with,” he said.

“The design of the new building, the new glazed link, the new Anzac Hall, the southern entrance and the new Bean building are world class.

“What we are seeking to do is deliver a world class centre of the nation’s commemoration of service and sacrifice.”

In a 2019 letter, the Australian Heritage Council said the demolition of Anzac Hall would “remove a significant contributory element of the identified heritage values”.

An independent assessment conducted by Hector Abraham Architects for the memorial in September said Anzac Hall embodied “part of the aesthetic values of the place” and its demolition was “a significant negative impact and the most detrimental aspect of the proposal”.

“The demolition would represent a very considerable loss of fabric that is of aesthetic value,” it said.

The architects also found the new Anzac Hall, and the glazed section linking it to the memorial building, would respect or enhance the heritage significance of the area by providing “greater space for the war memorial to display its collections”. It would also improve heritage values by partly restoring views of the dome and rear of the main building, removing the visual impact of the existing bridge to the hall, and changing the hall’s appearance from Mount Ainslie.

The expansion awaits one more hurdle as the National Capital Authority assesses its compliance with Canberra’s federal planning regulations.