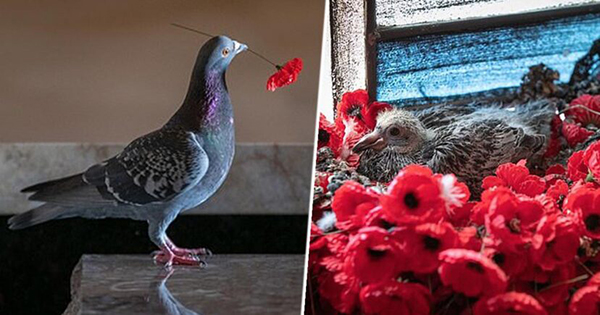 A poppy pinching pigeon who flew into hearts across the world has now welcomed a sweet little baby bird into her one-of-a-kind nest.

The disappearance of the poppies was initially a mystery, however the pigeon was eventually clocked as the culprit after a maintenance worker discovered her nest in an alcove above a stained glass window.

Now her bundle of feathery joy is finally here – snuggled up tight at the historic location – and is quickly becoming a celebrity in their own right.

Welcoming the fluffy baby to the world via a Facebook post, a representative for The Australian War Memorial wrote:

Earlier in the month we shared a story of a pigeon that had been busy preparing for new life in a place that commemorates death, sacrifice and renewal.

Each day the pigeon would fly down to the Tomb of the Unknown Australian Soldier to steal poppies, carefully crafting a nest in the lead-up to Remembrance Day in an alcove above the stained-glass window of a wounded Australian soldier.

People have fallen beak over wings for this little one, and have praised the mother pigeon for being such a good, resourceful mama.