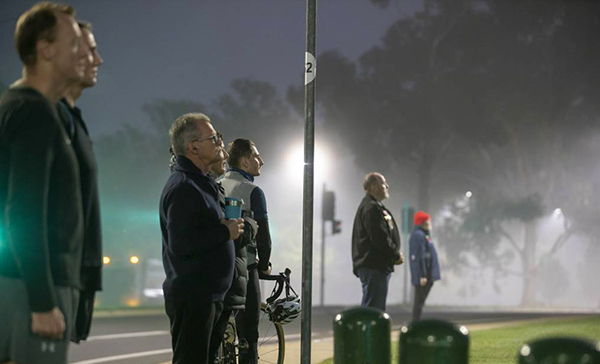 The Anzac Day service looked very different at the Australian War Memorial this year, with only a small number of attendees gathered for the live streamed service at dawn.

Prime Minister Scott Morrison reminded the pared back service and those watching from home that this was not the first time Anzac Day traditions had been interrupted.

As part of his commemorative address, Mr Morrison acknowledged the small group of Australians who gathered on the shores of Gallipoli that year to honour those who had served.

He said, like this year, it was a quiet affair. 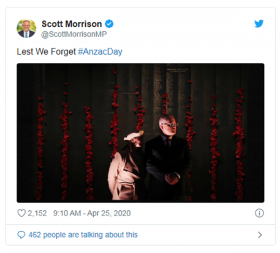 “We are all in this together, but we always have been. We always will be,” Mr Morrison told the audience.

Instead of the usual dawn service on the steps of the memorial facing out onto Anzac Parade in front of tens of thousands of people, just a few gathered outside to acknowledge the solemn ceremony inside.

Taking place in the commemorative area and hall of memory, the ABC broadcast the official ceremony to individuals and families celebrating in isolation.

“Australians all, Lest We Forget. Those who were so young and made us so free. Today is our most sacred day,” Mr Morrison said. 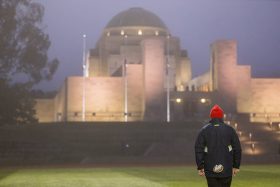 “On these walls we touch and see the names of fathers and sons, mothers and daughters, sisters and brothers who gave their lives for this country and the people they loved.

“Today at this dawn, in this place or wherever you are today let us listen let us open our hearts again to their stories and draw from them their inspiration.”

“I remember the quiet pain of war he endured and worked so hard to hide from a young boy who he hoped would never know war, a pain that would haunt him and wake him in the night,” he said.

Following his address, Mr Morrison and wife Jenny Morrison took part in a laying of the wreaths alongside Governor General David Hurley and his wife Linda, the High Commissioner for New Zealand Dame Annette King with Raymond Lind, the leader of the opposition Anthony Albanese, Chief of Defence Force General Angus Campbell, a representative for the Returned and Services League of Australia John King, Legacy Youth representative Stephanie Kindness, the chairman of the War Memorial Kerry Stokes and wife Christine Stokes.

Returned service nurse Wing Commander Sharon Brown was part of the small congregation inside, providing a response on behalf of the veteran community.

An Australian veteran, Ms Brown paid tribute to her grandfather private Arthur Albert Reader, who served as a stretcher bearer.

“After rescuing the wounded under fire for two long years he was killed on the Western front,” she said.

“His name is listed on the roll of honour alongside the friends who he served.”

Ms Brown’s address was followed by the recitation of an extract of the poem In Flanders Fields by Stephanie Kindness, chosen to represent the Legacy Youth.

Chief Commissioner for the Salvation Army Red Shield Defence Services Major Brett Gallagher called on those present and those watching to join in the prayer of commemoration.

“They shall grow not old, as we that are left grow old;

Age shall not weary them, nor the years condemn.

At the going down of the sun and in the morning

We will remember them.”

Those present and all those unable to attend, including many who stood at the end of their driveways as the sun came up the morning, were invited to observe one minute’s silence after The Last Post was played.

“Lest we forget,” Mr Bevan said before the national anthems of New Zealand and Australia were played.

The ceremony concluded with a lone piper, the noise from his bagpipes carrying across the near empty memorial site to the few people gathered outside to observe the tradition alongside those taking part.

From 11.30am, the Anzac Day ceremonies will continue, with all Australians encouraged to tune in to local television and radio stations.

The four-minute commemoration will include the Ode, The Last Post, one minute’s silence, and Rouse.

A tribute to acknowledge the more than 102,000 Australians who lost their lives in war, conflict and peacekeeping operations, and the service and sacrifice of those who have worn our military uniform.