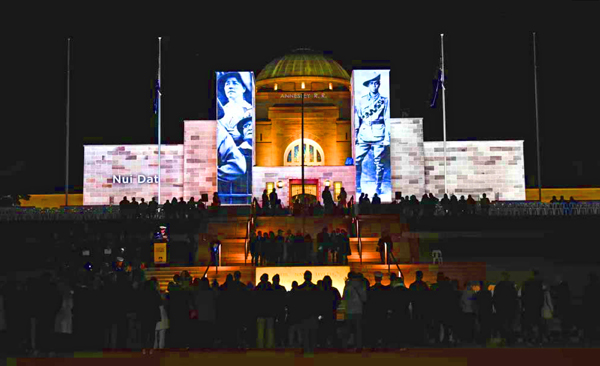 The Australian War Memorial is pushing for a $500 million expansion. Photo: AAP.

“I would like to put on the record my strong support for the Memorial’s plans to grow their exhibition spaces so that they may remain at the forefront of our national life and I urge the Government to provide the resources necessary to facilitate their important work,” he wrote.

The proposed expansion to the memorial could cost up to $500 million, and draft plans include a large underground space to house aircraft, an area for quiet reflection and space dedicated to more recent military operations.

The expansion itself is yet to be funded, but last year’s budget set aside $5 million for the development of a business case for the expansion, which Senator Seselja called “an important and welcome first step”.

Visitors to the memorial are increasing Senator Seselja said, making the expansion necessary.

“This success is indicative of the significant role the memorial plays in our national life, but it has also stretched the capacity of the memorial to its limit and, in anticipation of continuing growth in visitor numbers, it is clear the memorial is in serious need of expansion,” he wrote.

Senator Seselja said he took the step to write to the prime minister at this time because of the importance of the project.

“Obviously I’ve seen this issue progress over a period of time, but I’ve have had discussions with Brendan Nelson about the concept, we ran into each other at an event several weeks ago, in fact a couple of events, where we chatted about it, I think it’s a really exciting concept,” Senator Seselja told Fairfax Media.

He wants the memorial to be able to recognise recently returned veterans without impacting on existing recognition of older conflicts.

“We have a lot more veterans than we had 20 years ago, a whole new generation of veterans, and it’s important that their service is properly recognised without ever of course taking away from our great recognition of the sacrifices of WWI, WWII, Korea and Vietnam,” he said.

War Memorial director Brendan Nelson recently told a parliamentary inquiry that the efficiency dividends and caps on staffing levels “cannot be sustained”. Senator Seselja said he expected that if the government funded the expansion, more operational funding would also be necessary.

“If we’re going to do it, we should do it properly,” he said.

“I think in principle you would want to see some additional operational funding follow the capital funding.”

Senator Seselja rejected recent criticism from the Medical Association for the Prevention of War that the memorial focused too much on entertainment, and said that he supported the memorial accepting funding from weapons manufacturers.

“So I don’t see it in any way conflicting to have a great national institution like the War Memorial, which recognises the service and sacrifice of our service personnel, having money coming from organisations which would assist with the defence of our nation. I don’t see any conflict there at all.”