You are here: Home » Articles filed under: 'News' » Article: 'Back from the Brink?'

Back from the Brink? 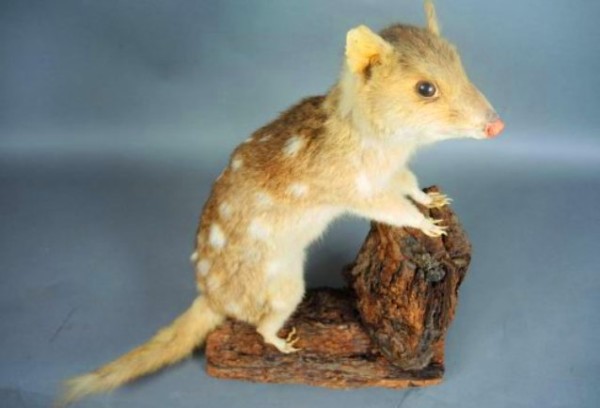 Renewed hope that a mammal thought extinct on the mainland has been given a second chance.

A collaborative effort between the Office of Environment and Heritage and the Australian Museum has confirmed the discovery of an Eastern Quoll specimen from Barrington Tops, raising hopes that the species may not be extinct in New South Wales.

The Eastern Quoll (Dasyurus viverrinus) is a boldly spotted 1 kg carnivorous marsupial that was once common throughout the open forests and woodlands of south-eastern Australia, before the introduction of Red Foxes saw the species disappear from the mainland between 1900 and 1960.

The last confirmed specimen of the Eastern Quoll on the Australian mainland was from Nielsen Park, Vaucluse in Sydney dating from 1963, and is now held by the Australian Museum.

A taxidermied specimen was recently handed over to the National Parks and Wildlife Service in Gloucester by a local resident, who reported it to be collected as a road kill on Barrington Tops in 1989. Staff at NPWS were excited to realise the specimen was an Eastern Quoll.

Dr Todd Soderquist, Threatened Species Officer of the Office of Environment and Heritage, said, “Reports of Eastern Quolls still occur in NSW occasionally, but most are likely to be mistaken identification of the larger Spotted-tailed Quoll. A confirmed record of an Eastern Quoll is extremely important in focusing our surveys toward areas where unverified yet promising identifications have occurred.

Although the new specimen could be identified as an Eastern Quoll, it was not initially clear whether it derived from a local Barrington Tops population or was an escapee from captive animals of Tasmanian origin, where a population has survived.

Skin samples taken from the specimen by staff at OEH were sent to Australian Museum researchers who conducted genetic testing to compare known mainland and Tasmanian Eastern Quoll specimens.

“DNA based analysis indicated that the new Eastern Quoll specimen was most similar to specimens from mainland Australia and not Tasmania,” Dr Greta Frankham of the Australian Centre for Wildlife Genomics at the Australian Museum confirmed.

In light of this finding, all potential sightings of Eastern Quolls in NSW over the last 40 years are being re-assessed for credibility by OEH. In addition, as part of the NSW Government’s $100 million Saving our Species program, surveys for Eastern Quolls are being designed to confirm whether any remnant populations survive.

“This discovery raises the possibility that the Eastern Quoll may still exist in regions such as Barrington Tops,” Dr Eldridge said. “Hopefully, the mainland Eastern Quoll has been given a second chance.”