You are here: Home » Articles filed under: 'News' » Article: 'Banksy offers to help save'

Banksy offers to help save 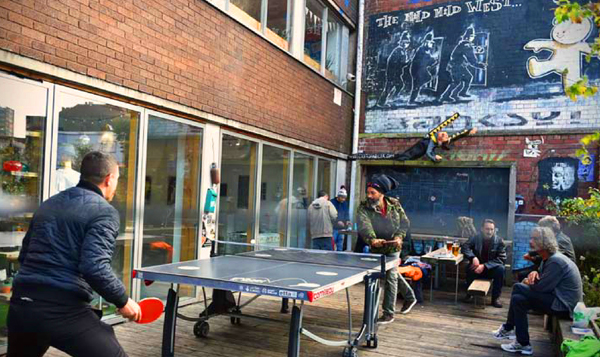 The anonymous street artist, who has a track record of supporting political causes, is said to have contacted Bristol city council offering his services.

The future of 17 out of 27 libraries had been uncertain due to £1.4m of proposed cuts, though the council recently announced a reprieve.

It is understood the Banksy’s conversation with Bristol mayor Marvin Rees was not about money but about the current options for the library service, and his thoughts on how organisations and individuals could help.

The artist’s offer was revealed during a council cabinet meeting, according to local reports, when the mayor was asked if there was any truth to rumours that a philanthropist had stepped forward to help libraries in Bristol.

Rees cautioned against rumours before saying: “It’s just that a very well-known person from Bristol wrote in and asked us the nature of the challenge and to outline what support we need as a city to meet that challenge, and that person was Banksy.

“He has come forward and talked about supporting us and we will see how that plays itself out. There is nothing signed and delivered and so far it is just a conversation that we had.”

The deputy mayor, Asher Craig, who is responsible for libraries, said Banksy was one of a number of people who had been in touch with the council.

There was no immediate response from representatives of the artist.

More than 12,000 signatures were collected on three petitions highlighting the importance of the libraries to their communities, which were presented to the council in November.

Among those who criticised the proposed cuts was the Blackadder actor Tony Robinson, a patron of the literacy charity Read for Good.

The council made a U-turn last month on its plan for local libraries, saying it had found enough money “to keep every single library” open.

It is talking to community groups, library users, staff and experts to transform and modernise the service. Community groups have offered to help run many of those that had been under threat.

A council spokesperson said: “The mayor has had discussions with a number of organisations and individuals, including Banksy, about supporting our libraries to help build a high quality, sustainable service for the city.

“We’re pleased to be working with many of these people to keep libraries open and are keen to develop those conversations further.”

Banksy has a track record of supporting causes, often political. Last year it emerged he had given a financial boost to peace campaigners by donating £205,000 raised from the sale of one of his works to human rights group Reprieve and Campaign Against the Arms Trade.

Civilian Drone Strike, which depicts a trio of Predator drones bombing a children’s picture of a house, was auctioned at Art the Arms Fair, a five-day exhibition coinciding with the Defence and Security Equipment International arms fair in east London last September.

In June last year, Banksy risked falling foul of UK election law by offering voters in Bristol constituencies a free limited-edition print if they sent in photos of their ballot papers in the general election to prove they had voted for anyone other than the Conservatives.

He posted the offer on his website, with a legal note beneath insisting that the offer was not meant to be seen as a form of bribery. However election law bans taking pictures of ballot papers as there are strict rules around voter secrecy under the Representation of the People Act.