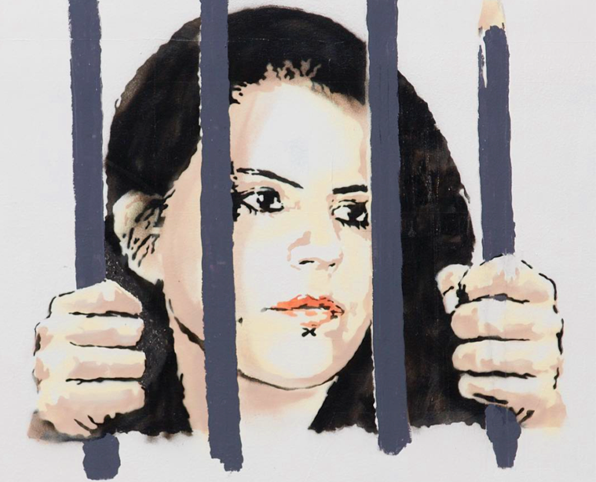 The letter thanks Banksy for his support of her cause.

Apparently, at least one member of the public knows how to get in touch with Banksy—artist Zehra Doğan. On Tuesday, the anonymous street artist posted a handwritten letter on his Instagram account with a caption that identified the jailed Turkish artist as the writer.

Doğan is currently serving a nearly three-year prison sentence in her home country for creating an artwork that depicted the wrecked Kurdish town of Nusaybin following its destruction by Turkish security forces. The painting included Turkish flags hanging from the bombed-out buildings, which immediately caught the attention of the Turkish government. Doğan was arrested at a cafe in July 2016.

In her two-page letter to Banksy, which is translated and abridged in the social media post, Doğan writes about the difficult conditions inside the prison and the ongoing conflict that rages on outside the facility.

“I am writing this illegal letter to you from a dungeon which has a history of bloody tortures…” she begins. “This letter is illegal because I have a ‘communications’ ban that forbids me from sending letters of [sic] making phone calls so I’m writing and delivering this letter in clandestine ways.”

The artist goes on to describe the atmosphere in the prison: “We are getting furious because of the horrible sounds of dozens of fighter jets that depart for bombing out beautiful lands… It’s very hard to describe the feeling of reading that someone you know is killed from the newspapers nearly every day.”

Near the end of her letter, Doğan expressly thanks Banksy (and his collaborator, Borf) for their New York mural protesting her arrest. In March, the street artist unveiled the public work dedicated to the jailed artist.

[W]e saw your artwork about Nusaybin and me, that protests the whole imprisonment. In a moment of pessimism, your support made me and my friends here enormous happiness [sic]. Far away from me and our people, it was the best reply to the crooked regime that can’t even tolerate a painting.

The mural was painted on the Houston Bowery Wall and featured a stark white background with black marks representing each day that Doğan was in prison. In the corner of the wall, the tally marks become prison bars, with Zehra’s face painted behind them. An image of Zehra’s own controversial painting was projected above the mural.

No stranger to politics, Doğan is also a writer and advocate for the feminist news agency JINHA, and was awarded the Metin Göktepe Journalism Award in 2015 for a series documenting Yazidi women escaping the stronghold of ISIS.