Australia Museum in Sydney is spearheading an innovative approach which helps reconnect Pacific communities with their cultural artefacts held in its collections.

This new approach has been instrumental in the revival of bark cloth painting in Erromango, Vanuatu.

The practice had completely disappeared until one traditional leader from South Erromango, Chief Jerry Taki Uminduru, visited the Australian Museum bark cloths collections in the 1980s and decided to revive the tradition in his home island in Vanuatu.

Collections Officer at the Australian Museum Yvonne Carrillo-Huffman said she was extremely moved by Chief Jerry Taki’s story of how encounters with the outside world had severely dislocated Erromangan identity. It was this discussion which prompted Ms Carrillo-Huffman to investigate ways to strengthen that identity.

Many of Erromango’s bark cloths and other cultural items had been either destroyed or donated to museums around the world.

“As a result of that, all aspects of cultural productivity die out because of the process of missionisation and people start leaving their grass skirts and bark cloth production and they start wearing european clothing,” Ms Carrillo-Huffman explained.

“In addition to that, there was the issue of the traditonal designs, they were fading into the memories of many people because of the process of conversion…there was no bark cloth being made.”

The process of reviving the practice had to be done with a lot of cultural sensitivity which required people to identify aspects of their designs and their associations with different clans. One of the sensitive issues was that of copyright.

But the most essential element of the revival was community interest, “if the community have no interest then it’s worthless to pursue it, but in this case people are really interested…this is the beginning of a major cultural shift that is happening.” 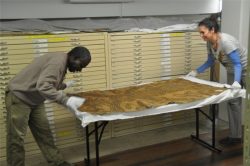 Handling bark cloth. Source: www.stuff.co.nz
Positions Vacant » View All
» Team Leader, First Peoples Art & Culture – TMAG
» Booking Services & Rostering Officer – SLM
Latest News » View All
Egyptians petition for BM to return
the Rosetta Stone Read more.
BM pledges ‘not to dismantle’ Parthenon
sculptures amid reports of talks with Greece Read more.
NHM to install life-size Titanosaur
cast The world’s largest dinosaur to fit (- just) Read more.
Gallerie d’Italia’s Art & Finance exhibition
- a long & mutually beneficial history Read more.
TMAG’s ‘Lost’ last Tasmanian tiger remains
found! ... cataloguing collections matters Read more.
Top +
Council of Australasian Museum Directors c/o Mr Brian Oldman, South Australian Museum PO Box 234 Adelaide, South Australia 5001 Australia, © CAMD 2022
Copyright: All information and resources provided on this website remain the copyright of the Council of Australasian Museum Directors. Permission is granted for viewing and downloading for personal and not for profit purposes. Those wishing to reproduce any materials for commercial, educational or other uses are requested to contact us.
Disclaimer: The content of this website is provided for information purposes only and is not intended as a substitute for professional advice. No claim is made as to the accuracy or authenticity of the content of the website. The Council of Australasian Museum Directors does not accept any liability to any person for the information or advice (or the use of such information or advice) which is provided on this website. The information on our website is provided on the basis that all persons accessing the site undertake responsibility for assessing the relevance and accuracy of its content. No responsibility is taken for any information or services which may appear on any linked web sites. Hostgator.
.