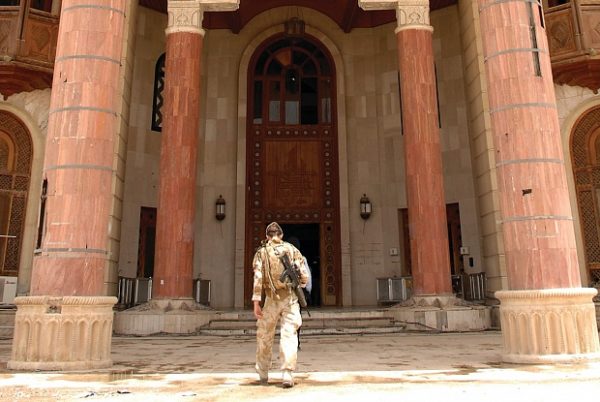 Martin Bailey, Basrah Museum opens against the odds in Iraq. New museum is housed in a converted former palace of Saddam Hussein, The Art Newspaper, 27 September 2016

Few outsiders can imagine the challenges of creating a new museum in Iraq. Just a week before the Basrah Museum was scheduled to open inside a converted former palace of Saddam Hussein today (27 September) most of the collection had yet to arrive from Baghdad.

The Basrah Museum has been planned for eight years and will join the National Museum in Baghdad as one of the most important institutions in Iraq. For the first time in a generation, the people of southern Iraq will have their own museum—a great achievement under extremely difficult circumstances.

The city’s old museum, in Basra’s historic centre, was looted during the first Gulf War in 1991 and damaged during the 2003 invasion. Fortunately, much of the collection had already been evacuated to Baghdad. The museum’s former director, Mudhar Abd Alhay, was shot dead amid communal violence in 2005.

Three years later, Alhay’s successor, Qahtan Alabeed, took up the dream of re-establishing a museum in Basra. The British Army and the British Museum agreed to help create a new museum with proper security, climate control, regular opening hours and modern displays. The plan was to take over the 1990 Lakeside Palace, which had been used by the British Army after the overthrow of Saddam.

Progress has been slow, largely because of fundraising problems in Iraq. At an early stage, the Basra Provincial Council promised a $3m contribution but, because of budgetary problems, the funds were never provided. Most of the funding has been supplied by the UK-based Friends of Basrah Museum. The charity, founded by John Curtis, a former keeper at the British Museum, has raised nearly £500,000, largely through contributions from the oil company BP.

The museum still lacks the funds to open fully. Alabeed has decided instead to launch the project piecemeal, beginning with a gallery dedicated to the history of the Basra region from around BC300 to the 19th century. The remaining three spaces—which cover Sumer, Babylon and Assyria—are expected to open in the next few years. The museum estimates the project will cost an additional £450,000 to complete. A grant under consideration by the UK’s Cultural Protection Fund would provide the necessary funds; a decision is expected in late November.

Alabeed’s latest challenge has been to secure the artefacts. For years, the old museum’s collection has been in the stores of the National Museum in Baghdad, controlled by the State Board of Antiquities and Heritage. After prolonged negotiations, officials agreed to loan 550 objects to Basra, including some from the city’s original collection. They will join 160 items, mainly Ottoman objects, that never left the city.

Transporting the objects to Basra—500km away by road—is yet another obstacle. Authorities must approve the works’ transfer and provide a military escort. The shipment was put on hold because of the Eid al-Adha holidays. Alabeed now expects the objects to arrive just a week before the planned opening. “That hardly gives us much time to put hundreds of objects into showcases,” he says.