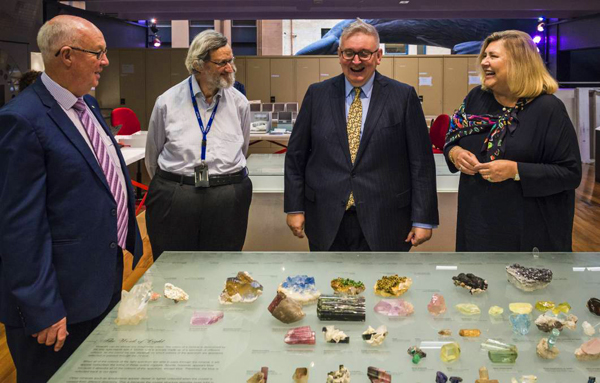 Talk about a collection that rocks.

The Australian Museum has announced that its world-renowned Albert Chapman Mineral Collection will go on tour to Bathurst later this year for an 18-month stay that will create the largest, most significant minerals collection in the country.

The Chapman Collection, which features around 550 specimens, will be housed at the Australian Fossil and Mineral Museum.

“This tour is a great win for Bathurst and will be a major drawcard for tourism to regional NSW,” NSW Arts Minister Don Harwin said.

“Central West NSW is already recognised as one of the world’s best mineral regions with a complex geological history, over 300 different types of minerals, many among the best Australian examples of their kind, and a rich mining heritage.

“The new Albert Chapman Mineral exhibition at the Australian Fossil and Mineral Museum combined with the region’s existing heritage will create strong opportunities for tourism, education and the community.”

The minerals make up two-thirds of the collection assembled by the late Albert Chapman during his lifetime and now in the care of the Australian Museum.

“All of the Chapman minerals are world class, and some even considered the finest examples of their type in the world,” Australian Museum director and CEO Kim McKay said.

Ms McKay said it was fitting that the Chapman Collection will be displayed alongside the Somerville Collection at the Australian Fossil and Mineral Museum.

“Not only are these collections respectively the two best mineral collections in Australia, Professor Warren Somerville AM was also a great friend of the late Albert Chapman, often seen together fossicking for minerals,” she said.

“Now, more than 60 years later, these minerals are being brought back together and may well inspire the next generation of geologists.”

Mayor Graeme Hanger said the Chapman Collection will contribute to the growth of Bathurst “as a regional centre of excellence in museums”.

The new Albert Chapman Minerals exhibition will open at the Australian Fossil and Mineral Museum in June 2019 and remain on display for 18 months.

During the tour, the Australian Museum will undertake a significant refurbishment to its Sydney site.​