You are here: Home » Articles filed under: 'News' » Article: 'Battle for Bark Art' 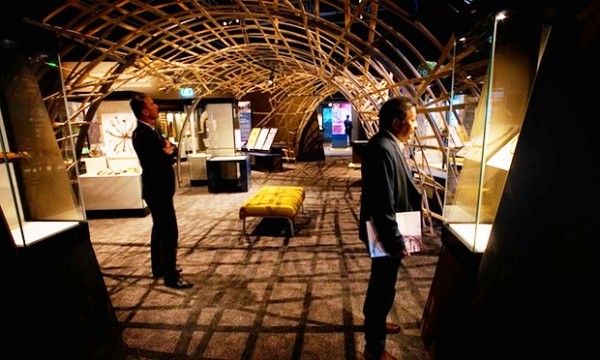 The Encounters exhibition at the National Museum of Australia features one of the Boort barks – a move some Indigenous activists see as unduly provocative. Photo: Mike Bowers for the Guardian

The British Museum, long intransigent on repatriating treasures such as the Parthenon marbles to their original owners, has entered detailed negotiations with a Victorian Aboriginal clan about potentially returning its sacred artefacts from London.

Since mid-2015 the museum – which has a collection of about 6,000 Indigenous Australian items – has corresponded and met with the Dja Dja Wurrung’s Yung Balug clan elder Gary Murray, who is demanding the return of three bark artefacts and other material taken from his people in the 1850s.

The memorandum is a likely first step towards a 2017 exhibition that would feature the barks. The exhibition would be held at the Bendigo Regional Art Gallery, in Dja Dja Wurrung country in central Victoria, and would represent a return of the items, freighted with great spiritual significance to their owners, to their country for the first time in 160 years.

The negotiations between the museum and Murray raise the possibility that any repatriation of the barks could initially take the form of a temporary loan to the Bendigo exhibition, followed by a later more permanent loan or return covered by a memorandum of understanding.

Murray is hopeful that the exhibition will be a precede to the permanent repatriation of the barks – as a loan or as an unqualified return by the British Museum – to a yet-to-be built cultural, arts and environment centre at Boort in the heart of Yung Balug clan country where the barks originated.