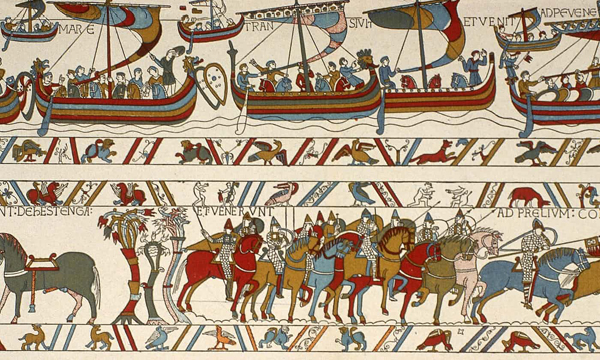 The Bayeux tapestry. Source: The Guardian.

The Bayeux tapestry will be loaned to Britain after Emmanuel Macron agreed to let it leave France for the first time in 950 years.

The president is expected to announce at an Anglo-French summit on Thursday that the artefact depicting the Norman buildup to, and success in, the Battle of Hastings in 1066 will be loaned to the UK, probably in 2022.

Theresa May will use the decision, which has involved lengthy talks between each country’s respective culture departments, to highlight the strength in UK-French relations after Brexit.

An Elysée official said the loan was agreed in principle but would not happen for several years because work needed to be done on the tapestry to ensure it was safe to move it. “It’s very symbolic for France and maybe even more for the UK,” he said.

The date of the loan would probably be 2022 when, it is understood, the Bayeux Museum closes for refurbishment.

One leading contender to show the tapestry would be the British Museum. Its director, Hartwig Fischer, said it would be “honoured and delighted” to display the tapestry.

“This would be a major loan, probably the most significant ever from France to the UK. It is a gesture of extraordinary generosity and proof of the deep ties that link our countries. The Bayeux tapestry is of huge importance, as it recounts a crucial moment in British and French history, 1066.”

He said the museum was the “UK’s most visited and internationally renowned institution” and added: “Here it would be seen by the widest UK and international audience in the context of a museum of world cultures.”

Adding to the museum’s case is the size of its temporary Sainsbury exhibition gallery, which opened in 2014 and has staged major shows on subjects including the Vikings and the Scythians. The gallery is 70 metres long, making it able to host the 68-metre tapestry.

It is understood the museum has been in talks about a possible loan of the tapestry for several years, but there will be other contenders to host it.

The bookmaker Ladbrokes is offering odds on where it might go, with the British Museum evens favourite, followed by Westminster Cathedral at 3/1, Canterbury Cathedral at 5/1 and Hastings at 8/1.

If the tapestry does come to the UK, it raises the question of what reciprocal loan could be made to France, with the Rosetta Stone, originally in French hands until Britain defeated the French in Egypt in 1801, a likely contender.

The tapestry is thought to have been made shortly after the Battle of Hastings in the 11th century. Some historians argue it was made in Kent, a debate that is set to reignite following the announcement.

There have been previous unsuccessful attempts to negotiate a loan of the embroidery to the UK: once for the Queen’s coronation in 1953, and in 1966 for the 900-year anniversary of the Battle of Hastings.

The embroidery has rarely been moved even within France. In 1803, Napoleon Bonaparte put it on display in Paris and in 1945 it was briefly displayed in the Louvre after being seized from the Nazis.

The announcement is likely to lighten the mood when May hosts Macron at Sandhurst military academy on Thursday. The leaders are expected to discuss the migration crisis at Calais and agree closer cooperation on fighting al-Qaida-linked militants “at source” in north Africa. The prime minister is expected to announce that Britain will send military helicopters to join a French campaign against Islamist extremists in the region.