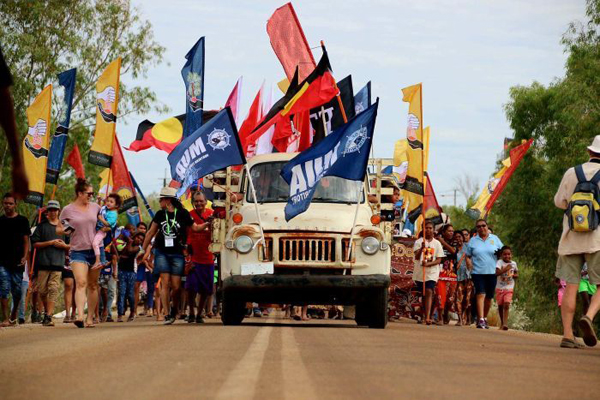 A piece of Northern Territory history linked to the land rights movement is set to be immortalised in the National Museum of Australia in Canberra.

From 1966, a Bedford truck was used to transport supplies to the stockman who walked off Vestey’s station at Wave Hill in protest over wage equality.

It was driven by Brian Manning, who was accompanied by Daniel Dexter, Robert Tudawali and then 14-year-old Kerry Gibbs.

The old truck delivered food and supplies that facilitated the birth of the land rights movement in Australia.

After nine years on strike, the Gurindji land was handed back to its traditional owners.

That moment was immortalised when then-prime minister Gough Whitlam poured a handful of sand into the hands of land rights leader, Vincent Lingiari.

“Had they stopped and had no food, they would’ve gone back,” Mr Gibbs said.

“I know the old men and a lot of them would’ve died doing so, but that’s how you make people return, starve them, and that’s what was happening.”

Mr Manning died in 2013, but he bequeathed the iconic truck to Mr Gibbs who allowed the truck to be conserved in the National Museum.

Mr Gibbs said he had the approval of the Gurindji people to gift the truck.

“And as the Gurindji people stated, ‘it’s not just for our mob it’s for whole of Australia,'” he said.

A replica of the truck was the centrepiece of a memorial walk at Kalkarindji this year, which saw thousands of people mark 50 years since the Wave Hill walk-off.

“I was actually quite overcome when I saw the replica truck and I actually sat in the cabin with Kerry and memories came flooding back for me,” Brian Manning Jnr said.

“As a child it was form of family transport, the family car you know, like being chauffeured to school by the old man in this rust bucket, as I considered it in those days.”