You are here: Home » Articles filed under: 'News' » Article: 'Beer cans, cigars and puppets: What should'

Beer cans, cigars and puppets: What should

May 24th, 2019 | Browse other: News. | Tagged with: Labor party to purchase and renovate Hawke House, Museum of Australian Democracy | 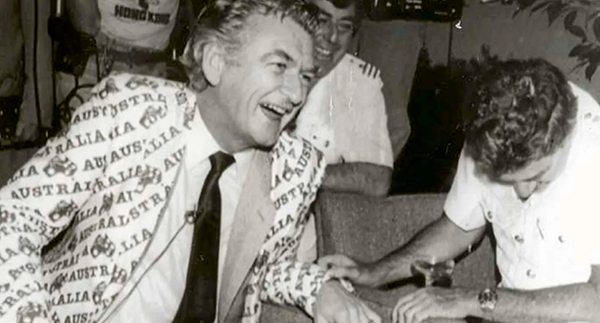 Andrew Taylor, Beer cans, cigars and puppets: What should be displayed in a museum dedicated to Bob Hawke?, Brisbane Times, 19 May 2019

Beer cans, cigars and that lairy America’s Cup jacket are some of the items that experts suggest could be displayed in a museum dedicated to former prime minister Bob Hawke who died last week.

The Labor party announced earlier this month that, if elected, it would spend up to $750,000 to purchase and renovate Hawke House, the childhood home of Mr Hawke in the South Australian town of Bordertown.

The Liberal party did not say whether it would match Labor’s promise to turn the property into a museum celebrating Mr Hawke’s life and achievements if the Morrison government was re-elected.

But what should a museum dedicated to Mr Hawke contain, given the University of South Australia already hosts the Bob Hawke Prime Ministerial Centre?

A replica of the America’s Cup jacket worn by Mr Hawke is held by the Centre of Democracy in Adelaide.

The Museum of Australian Democracy in Canberra holds an extensive collection of Hawke memorabilia, including election posters and leaflets, photos, personal letters, a 1975 portrait and Hawke’s Telecom Commander telephone with direct dial buttons to his staff and ministers.

A pincushion, lamp and garden gnome, all designed to resemble Mr Hawke, also feature in the museum’s collection as well as a drinks dispenser in the shape of Mr Hawke’s head with a sticker that reads: “Take the piss out of Bob”.

Kate Armstrong, the museum’s manager of interpretation and development, said visitors to a House Museum are often attracted to personal objects that have been regularly handled by the owner.

She suggested a well-loved childhood toy, lecture notes on political strategy or international relations from his university career, or a recording of Hawke delivering a rousing speech in his union days.

“A house museum often concentrates on someone as a person rather than as a political figure,” Ms Armstrong said. “Anything that relates to Hawke and his personal life would be worthy of consideration for the house museum collection and for display.”

Stewart Jackson, a lecturer in the Department of Government and International Relations at the University of Sydney, also favoured personal items such as school and university memorabilia, cans of Hawke Lager and “given his love of sport, a photo of Hawke being hit with a cricket ball and any sporting memorabilia he retained”.

“I think it is a small price to pay for preserving a piece of Australian heritage, especially when taken in the context of the $50 million [Captain James] Cook memorial,” said.

“Hawke is an important figure, whether loved or hated, alongside John Howard, because both had a key role in transforming Australia economically and socially.”

John Tate, a senior lecturer in politics and international relations at the University of Newcastle, opted for humorous items such as video clips of Max Gillies impersonating Mr Hawke, his puppet from the 1980s satirical television series Rubbery Figures, and a “replica of his coiffure which defied gravity”.

Dr Tate said a collection of Hawke artefacts should also include “one of his cigars that Paul Keating said stank out the Prime Minister’s office when he arrived to replace Hawke”.

NSW Labor’s acting leader Penny Sharpe said she would include Mr Hawke’s response to the Tiananmen Square massacre in 1989 and his 1988 speech following John Howard’s comments on immigration.

“I am sure that there will be many who will point to beer glasses, jackets and cigars,” she said. “We need to have his Medicare card.”