You are here: Home » Articles filed under: 'News' » Article: 'Behind Australia’s museum boom' 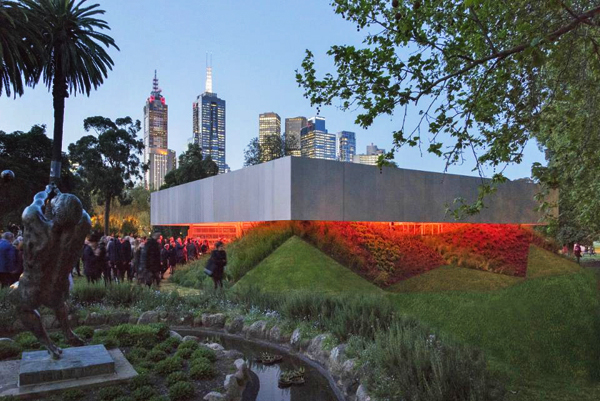 The MPavilion, a temporary event and performance space that is installed for four months every year in Melbourne’s Queen Alexandra Gardens.

The world’s greatest cities are nothing without their galleries. London has the Tate Modern, New York has the Museum of Modern Art and Paris has the Pompidou Centre. But what art spaces do Australian cities have?

You may not be able to name a single gallery in Australia, but the country is in the middle of a cultural boom. In 2017 alone, plans for museums, galleries or other arts spaces have been unveiled in all six of Australia’s states.

One of Australia’s most famous art institutions is the Museum of Old and New Art (MONA) in Hobart, Tasmania. Since Australian businessman and art collector David Dominic Walsh opened MONA in 2011, more than 1.7 million people have walked through its doors, adding an estimated US$100million to Tasmania’s economy every year.

Just as architect Frank Gehry transformed the sleepy Spanish town of Bilbao with his curvaceous Guggenheim Museum, Walsh has rejuvenated the Tasmanian capital of Hobart with MONA, which houses controversial artworks including Wim Delvoye’s Poo Machine, an installation which converts food into faeces.

And now Walsh wants to push MONA even further. In July, he unveiled plans for the “next phase” of the museum, an extension called HOMO (which stands for Hotel at MONA). The HOMO extension includes an 172-room, five-star hotel, but it will also feature a library and new spaces for performing arts. Inside HOMO, the MONA Library will house Walsh’s large collection of rare books and manuscripts and will be accessible to the public and researchers. If all goes to plan, HOMO will open in 2022.

Aside from Walsh, other philanthropists are funding new arts and cultural spaces around the country. Naomi Milgrom, the owner of women’s clothing brands Sportsgirl, Sussan and Suzanne Grae, thinks that private patrons have played a key role in strengthening Australia’s cultural scene.

“There are a number of individuals with big ambitions,” Milgrom explains. “Ulrike Klein in South Australia is one, she’s developed the Ukaria Cultural Centre, which is a beautiful performance space for music. There’s also Judith Neilson, who’s created the White Rabbit Gallery in Sydney.”

Milgrom is too modest to include herself in that list, but she is one of the country’s most prominent patrons of the arts. Through the Naomi Milgrom Foundation, she supports art, design and cultural projects in Australia and around the world. Her most famous initiative is the MPavilion, a temporary event and performance space that is installed for four months every year in Melbourne’s Queen Alexandra Gardens.

While it’s up, the MPavilion hosts everything from fashion shows to lectures by artists to performances by local musicians, all of which are free to the public. In its run from October 3, 2017 to February 4, 2018, it’s estimated that “more than 100,000 people will pass through the current MPavilion” according to Robert Doyle, Lord Mayor of Melbourne.

“With the MPavilion, I want to deliver an inspirational civic space for Melbourne,” Milgrom explains. “People can come and go, there’s no ticketing. It’s a completely free cultural space.”

Milgrom commissions a different architect to design the MPavilion every year. For this year’s MPavilion, the fourth, she enlisted the famous Dutch architect Rem Koolhaas. With his studio, the Office of Metropolitan Architecture (OMA), Koolhaas created a high-tech amphitheater that could accommodate the varied events planned for the building.

Keen to attract both international and interstate tourists, Australian state governments are also investing in new cultural spaces. The local government of New South Wales, for example, is spending AU$244million (approx. US$191million) to extend the Art Gallery of New South Wales in Sydney.

Designed by Japanese architectural firm SANAA, the planned extension includes an elegant new building and the renovation of unused, WWII-era oil tanks buried beneath the museum into cavernous exhibition spaces. It will create more than 4,500 square metres of new gallery space and is estimated to boost visitor numbers from 1.2 million people per year to 2 million. More visitors also mean more money. In the first 25 years after its completion, the gallery believes its extension will add AU$1billion (US$785million) to the economy of New South Wales.

The other side of the country, in the far western city of Perth, the local government has committed AU$428million (US$335million) to fund the New Museum for Western Australia. Like this year’s MPavilion, this mega museum in Perth has been designed by architectural firm OMA.

“The New Museum for Western Australia was the first time in Australian history that they organized a tender where only international architects could compete,” David Gianotten, one of OMA’s Managing Partners, explains. OMA competed against other major firms including Jean Nouvel and Foster and Partners.

“We’re very used to competing with those firms in Europe, but we very rarely encounter them on the other side of the world. That really shows how the Australian cultural scene is growing.”