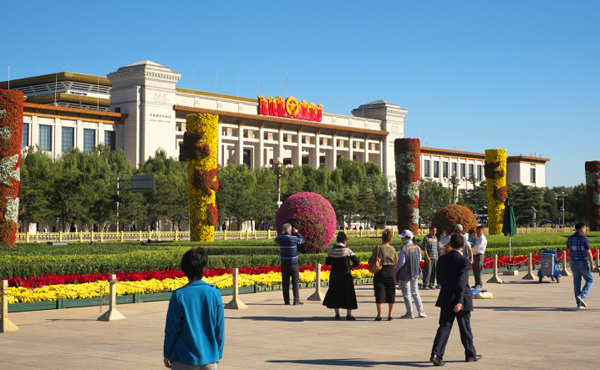 The National Museum of China in Beijing was 2016’s top-attended museum in the world. (photo by Andrew Sales/Flickr, used under CC BY 2.0 license).

Almost 108 million people visited museums around the world last year, according to a new report.

The most attended museum in the world last year was Beijing’s National Museum of China, according to a new report published by the international nonprofit Themed Entertainment Association (TEA) in collaboration with engineering company AECOM. Released earlier this month, the study features a list of the 20 museums that drew the most visitors in 2016, and unlike the art-specific annual report produced by The Art Newspaper, it examines museums of all kinds, including science and natural history. Art institutions, however, do account for 13 of the top 20, including the Metropolitan Museum of Art, the British Museum, and Tate Modern.

Visited by 7,550,000 people last year, the National Museum of China dethroned 2015’s most popular museum, the Louvre. The Parisian institution now sits in third place, behind Washington, DC’s National Air and Space Museum, having suffered a nearly 15% drop in visitors (to 7,400,000). It did receive more foot traffic than Hong Kong Disneyland (6,100,000) — which we know because TEA TEA’s so-called “Global Attractions Attendance Report” crunches the numbers on amusement and water parks around the world, too. Unsurprisingly, the top 15 amusement parks all surpassed the top 20 museums in terms of attendance last year.

Those 20 museums, however, set a new record high together in 2016, attracting a near total of 108 million attendees. The jump is relatively small, exceeding the last record by just over one million visitors, but it bodes well in the face of any local recessions, technological trends, or dips in government funding. (Animal rights advocates will be happy to know that the majority of those museums were also more popular than SeaWorld Orlando — the world’s 25th-most-popular amusement park — which experienced a 7.9% decrease in attendance from 2015).

Researchers have actually observed a 2–3% overall growth in worldwide museum attendance since 2012 — the year TEA first incorporated museums into what was then a seven-year-old study. Most of that stems from increased numbers in Asia, although the US and European markets have each witnessed about a 1% annual growth. The increase in Asia, the researchers note, stems largely from the Chinese government’s investment in developing hundreds of new museums every year, as well as its sponsorship of free admission. And the National Museum of China, of course, has an inherently huge advantage, given its country’s population size and its location in a major tourist destination.

Tourism is largely to blame for the Louvre’s drop in numbers — or rather, a lack thereof. Between 2015 and 2016, tourism in the greater Paris region fell 1.5%, caused not only by economic and political events, but by a season of particularly heavy rain, according to the study. As Hyperallergic previously reported, the Louvre, the Musée d’Orsay, and the Grand Palais were forced to close last June due to dangerous flooding of the Seine.

The researchers also break down museum attendance by region, carving up the world into North America, Asia-Pacific, and EMEA (Europe, the Middle East and Africa), conspicuously leaving out South America. The chart of top 20 North American museums is comprised exclusively of US institutions, with the seven most popular located in either New York City or Washington, DC. Six of the 20 are art museums, and the top performers, unsurprisingly, offer free admission.