July 15th, 2021 | Browse other: News. | Tagged with: Being told about National Trust houses' connections to slavery should not deter visitors, Visiting a historic house should be about more than just cream teas and crocuses |

Bendor Grosvenor, Visiting a historic house should be about more than just cream teas and crocuses—their full histories, however unsettling, should be told, 12 July 2021

Being told about National Trust houses’ connections to slavery should not deter visitors: the complex history adds to their interest 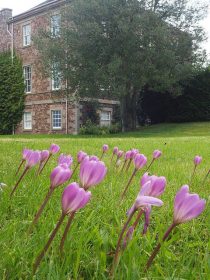 Harmony House in Scotland is one of many National Trust properties that have connections to slavery Photo: © Graham Hogg.

Early for school pick up, I visited Harmony Garden, a National Trust for Scotland (NTS) property in Melrose, near where I live in the Scottish Borders. The garden, beautifully maintained and with views of Melrose Abbey, is enclosed by a high wall, built around a handsome Regency mansion, Harmony Hall. “As its name suggests”, begins the entrance sign, “at Harmony Garden, nature is perfectly in tune. Step out of normal life into somewhere more colourful, relaxing and balanced”. And indeed it is, especially in spring, with its celebrated “bulb lawn” of sweet-smelling narcissi, violets and crocuses.

Sitting on a bench beneath a newly leafed lime tree, I decided to Google Harmony’s history. It turns out the name Harmony Hall was not chosen for any spiritual or horticultural purpose, but was from a slave plantation in Jamaica, where Robert Waugh, who built the house in 1807, owned estates and at least 150 slaves. Slave plantations in Jamaica often had incongruously benign names; “Pleasant Prospect” and “Paradise” are two listed in the same parish as Waugh’s estates. That Waugh decided to name his retirement home after a slave plantation suggests he had no qualms about the brutal suffering from which his wealth derived.

But should we feel uncomfortable about it today? Some say that paying any regard to such troubling history is pointless, a plot by the “woke” to spoil a nice day out. These are the same people who insist on keeping statues of slave traders up, “because they help us learn about our history”, but don’t want to learn about slave traders’ houses, in case an attack of moral indigestion puts them off their cream tea. There was a talking head on GB News’s “woke watch” segment railing against visitors to National Trust properties being “lectured” about historic connections to slavery as if it were an assault on their human rights. 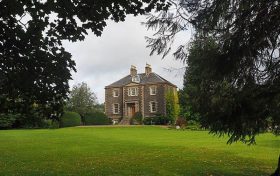 I never knew the truth could be so offensive. Yes, discovering the unpleasant past of a place you have long enjoyed visiting might be a shock. For me, on my bench beneath the lime tree, Harmony Garden did assume a momentarily sinister air, like one of those horror-film moments when the smiling lady in the charming house is revealed to be a serial killer. I regretted not knowing, and thus not recognising, the efforts of the exploited on which my enjoyment had been based. But it is no less a place worth visiting; now, the complex history only adds to its interest.

The current entrance sign at Harmony Garden makes a brief mention of Robert Waugh having made “his fortune from a lime and pimento plantation in Jamaica”. But this autumn, the NTS will publish the results of a new research project, begun last year, called Facing our Past. The document will show that more than half of NTS’s properties have connections to slavery. As with Harmony Hall, many of these connections involve Jamaica, which abounds with Scottish place names (Waugh’s estates were in an area called, perhaps by him, Melrose) and where it is said that up to 60% of Jamaican surnames have a Scottish origin. It is no coincidence that the Jamaican flag is based on a saltire.

Perhaps then proper reference can finally be made to the stories and lives of those whose labour helped create Waugh’s home in the first place. If Harmony Garden in Melrose, Scotland, became a memorial to those who lived in Melrose, Jamaica, and a link to those who live their now, our understanding and enjoyment of both its past and present can only grow.