You are here: Home » Articles filed under: 'News' » Article: 'Best of the Web win'

Best of the Web win 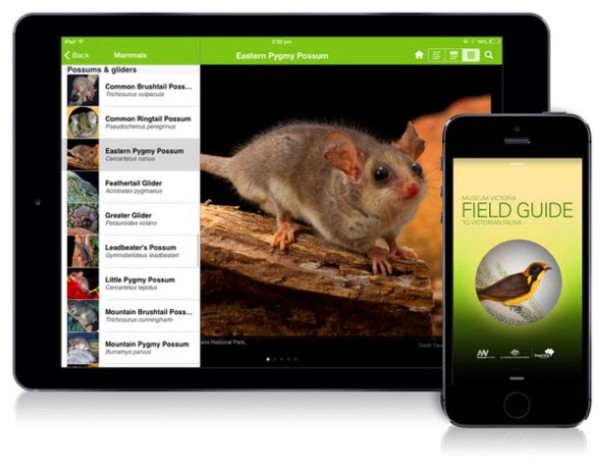 The Field Guide to Victorian Fauna app, with editions available for other states and territories. Source: Museum Victoria.

Field Guides to Australian Fauna – a suite of eight apps, Museums and the Web, 28 April 2015

The Field Guides to Australian Fauna are a suite of eight apps, one for each state and territory in Australia. They are available for Apple and Android devices, and optimised for both tablet and mobile phone screen sizes. They are free to download and have no in-app purchases. This is an example of museums producing apps that can be used anywhere, and don’t require users to visit a museum venue to enjoy and find value in the content. Having been produced by museum professionals, the Field Guides to Australian Fauna suite of apps are seen as reputable and authoritative sources of information and are valued by the community of users.

Field guides are used to assist with the identification of animals in nature. They have traditionally had an audience of scientists and amateur naturalists, who were willing to carry around heavy books specialised for the purpose. The Field Guides to Australian Fauna suite of apps can be used by everyone, everywhere – from families in their own backyards, to students on school excursions, to tourists in national parks. Together they feature over 2100 animals, including mammals, birds, fishes, reptiles, frogs and invertebrates from terrestrial, freshwater and marine environments.

A separate app was produced for each state and territory around Australia, partly because the download size for a single app would be very large but also to allow each partner organisation around the country to be their own app publisher. This has been beneficial to each of the museum partners, some of whom became app publishers for the first time with this project. Having their own app has allowed each museum to take on their own publicity and marketing, in the way that suits them best.

The development of the apps was a nation-wide collaborative venture bringing together scientists, photographers and educators from Australia’s leading natural history museums. Partners in the project were:

The project was funded by the Australian Government through the Inspiring Australia initiative. An important additional collaborator was the Atlas of Living Australia.

The base layer of content in each app is the species profile. This contains a descriptive text, photographs, conservation status and a map. Additional features include flight times for butterflies, calling times for frogs, depth information for marine animals, and audio calls for birds, frogs, and other noisy critters (koalas, possums, foxes, etc). Each collaborating institution brought in the expertise of their scientists, collection managers, honorary associates and photographers, and they are credited on the species pages. In all, over 350 people from around the country contributed content to the suite of apps.